250 in charge for McCulloch 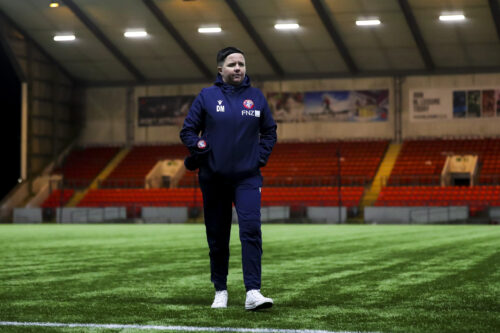 This Sunday’s Sky Sports Cup Semi Final will see Debbi McCulloch take charge of her team for the 250th time as the Spartans Manager looks to overcome Rangers to book a place in the Final of the tournament for the fifth time.

In 2002 McCulloch graduated from Abertay University with a BSc (Hons) in Sports Development with Coaching which has led Debbi into a career of football development and coaching.

McCulloch first joined the Women’s Premier League team in 2009 as Assistant Head Coach before progressing to become our Head Coach in April 2010 and from the end of 2012 1st Team Manager.

Her first ever game in charge was on the road at Aberdeen back on the 25th April 2010, where her new charges were 3-0 victors at Lochside Park, Bridge of Don. A Dianna Barry brace followed by a Pauline Hamill goal getting the managerial campaign off to winning ways.

That season saw Spartans reach treble figures in terms of goals scored, reaching 102 across 22 games, including a club record 0-21 win away to Dundee United in October 2010.

The following year saw McCulloch guide the side to the runners-up spot in the Premier League campaign.

The campaign also included two big wins – 16-0 against Forfar Farmington and 11 without loss at home to Inverness City.  Oh yes, and a win against Glasgow City away from home which was the first SWPL defeat for the City in almost six years.

It was another semi-final clash during the 2014 campaign that saw McCulloch reach the half-way point in this Managerial milestone.  A 4-1 Scottish Cup last four victory over Aberdeen in Scottish Cup set up a trip to the side’s inaugural Scottish Cup Final where they were to finish runners-up to Glasgow City.

In 2015, Debbi announced that she was stepping down from her role as Manager and Head Coach of the SWPL side at the end of the season.

During that time, she had guided her side to four League Cup Finals and a Scottish Cup Final whilst maintaining the team’s perennial Top 6 spot in the Premier League.

Absence, they say, makes the heart grow fonder.  Either that or McCulloch just couldn’t keep away from the post that had brought about the rollercoaster ride of 149 match in charge.  In July 2018, it was announced that Debbi was set to return to the big chair for her second spell in charge and it saw just one defeat in six League matches ensuring top flight football remained at Ainslie Park.

A further three semi-finals have been reached since in the search for silverware. A Scottish Cup Semi Final in 2018 and a pair of League Cup final four spots in 2019 & 2021.

UEFA ‘A Licence’ Coach McCulloch was in South America earlier this season with a visit to join delegates on the prestigeous FIFA Coach Mentorship programme.

Gaffer Debbi McCulloch even set her Costa Rican alarm clock for bleary-eyed start to keep up to date from her virtual dug-out via Zoom to offer her guidance during the teams 2-1 win over Hearts!