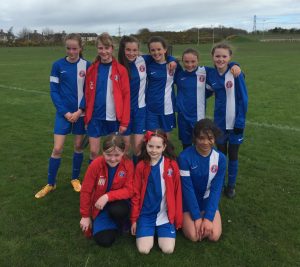 In what’s been a really stop start season so far for the Under 13s, the Girls played Hearts Whites in the last 16 of the League Cup on Sunday and ran out 7-4 winners.
Coach Alan Woodrow writes,
“We started slowly but once we settled we got a 2-0 lead. Hearts hit back with a really good goal but the last 15 minutes on the half seen us score three without loss to extend our lead to 5-1.
Hearts gave themselves a welcome boost by reducing the score to 5-2 just before the break.
The second half saw Hearts edge back into it and at 6-4 the game was firmly in the balance. A goal with five minutes to go sealed a 7-4 win that sees us reach the Quarter Finals.  Well done to both sets of players for putting on a great game full of goals!”
The photo shows the winning Spartans squad: Maddie Wilson, Christy Cargill, Ellie Le Sueur, Melissa Munro, Gemma Saunderson, Eva Kelly, Niamh Woodrow, Ellie Venters, Jessica Shaw.  Scorers: Maddie 5, Melissa & Ellie.
If you are interested in playing for one of Spartans Girls 11’s teams (7 a-side) why not send Alan or one of the other coaches an email  or pop along to a training session at the times shown below.

(Please remember to delete the spaces either side of the @ )