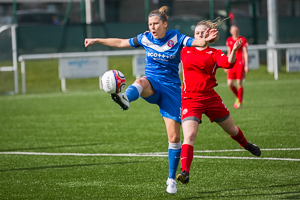 A second half penalty by Sarah Ewens earned Spartans an opening day win against Hamilton at Ainslie Park in what Manager Debbi McCulloch described as “a comfortable performance” that delivered “an important three points the girls worked very hard for.”

A route one attempt by Stephanie Briggs almost resulted in an opening goal for Katie Reilly however the wind took the ball off the Captain’s shoelaces before she could pull the trigger.

Sarah Ewens forced a free-kick 20 yards out as she weaved her way through the Hamilton defence before being brought to the ground.  Montgomery’s free-kick was well saved by the impressive Cunningham.

The game, watched by National Team Head Coach Anna Signeul, came to life on the half hour mark with two goals in as many minutes.

Kerry Montgomery capitalised on a defensive blunder by Donnelly to round the keeper to put Spartans in the lead however immediately from the restart, Gemmell unleased a strike from just outside the box that flew into the back of Rachel Harrison’s net.

Ewens had an opportunity to regain the lead however Cunningham was equal to the task as she got down low to smother the ball at her near post.

A speculative shot by Hogg saw Harrison watch the ball come back off her crossbar as the visitors looked to take advantage of the wind at the start of the second half.

At the other end, a Ewens free-kick brought out an acrobatic save from the Hamilton keeper who tipped the ball over the bar.

It was an SWPL debut for Ronaigh Douglas as the Youth player came on for Tracy Donachie on the hour mark.

The game took its most defining turn on in the 70th minute when Spartans were awarded a penalty kick.

Ashley Nicolson’s long ball saw Ewens dash into the box only for Donnelly to elbow the Spartans player to the ground.  The Hamilton defender paid the ultimate penalty as she was shown a red card for her transgression.

Ewens dusted herself down and calmly drilled the ball hard into the back of the net to score her side’s 500th competitive goal since the Club formed in 2008. 2-1.

Ciara Barnes replaced McLaughlin shortly after as Spartans looked to protect their lead against the 10-man Academicals.

Harrison almost handed Hamilton a lifeline when a wayward throw-out caught the wind and almost fell into the path of Richardson however the ball got caught up under the visiting striker’s feet and the danger was cleared.

Penalty hero Sarah Ewens said, “It was good to get the win today.  It’s always a battle against Hamilton as they are a good team.  On the whole I think we deserved the win and could’ve scored more, but at the end of the day, its 3 points and that’s what we set out to achieve.”

Manager Debbi McCulloch commented, “With us having seven players out then Lana Clelland picking up an injury whilst away with the National Team, it was important to get the season off to a positive start and we’ve done that by picking up three points today.  I thought the Hamilton keeper performed extremely well to keep us at bay however in the end I felt that it was a comfortable win for us.”

Second half sub Ronaigh Douglas impressed when she replaced Donachie and the youngster is a player that excites the Spartans Manager. “Ronaigh didn’t look out of place today and I thought she played fantastically well, especially with Anna (Signeul) watching.  Hopefully by placing her on this platform it will show others that she has the ability to go very, very far.”

Despite a double from Laura McRitchie, the Reserves went down 6-2 in their SWFL 2nd Division opener at Meadowbank against Hutchison Vale Reserves.