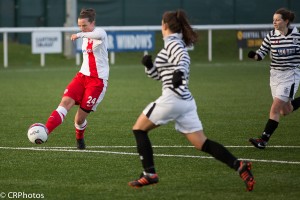 It’s East v West at Ainslie Park on Sunday as Spartans take on Queen’s Park Ladies in the final home fixture of the pre-split SWPL campaign.

Spartans head into the game looking to continue their impressive home record, with only one defeat at Ainslie Park this season so far and build on their impressive five-match unbeaten run that seen the side score 37 times and conceded just four in reply.

The visitors head to the Academy for the second time this year; the teams met in a pre-season friendly when the newly promoted Queen’s held their own in a narrow 2-1 win for Debbi McCulloch’s side.

McCulloch is looking forward to another tough encounter against the Spiders who are searching for their first win of the season.

“I was surprised in the pre-season game in the quality & strength Queen’s Park had and I thought they played extremely well and we’ll need to be performing like we have been of late to secure another 3 points.

“I’ll not make any secret of it, but we are going out to win our next three games before the split and keep our current unbeaten run intact.

“We’ve had a tough run of games and I’ll be hopefully looking to utilise the squad and I’ll not be scared to throw some of the girls into the deep end either to try things out ahead of the split.

“The points we earned up in Aberdeen last week were vital in a game that we weren’t allowed to play our normal style of football and we dug it out and it gives us a good platform to build on for Sunday’s game.”

The match kicks off at 1pm.