Beveridge looks to fill Cup of ambition as season gets underway 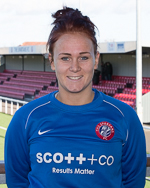 Spartans Women’s competitive season gets underway tomorrow when they travel to Glasgow to take on Rangers Ladies in the 1st Round of the League Cup at Petershill.

The campaign kicks-off against their fellow SWPL rivals as Debbi McCulloch’s side look to go one better than last season when they lost out to Glasgow City in the Final at Alloa FC’s Recreation Park.

After an intense pre-season campaign that included a 4-3 win against English Super League 2 side Durham Ladies, it’s down to business against a side that finished one place behind the Ainslie Park side last season.

Last time out, Spartans defeated their hosts courtesy after a late Lana Clelland strike ensured her side made the trip back along the M8 a successful one after securing a 2-3 win.

Spartans full back Bobbie Beveridge (pictured) is confident her team can go one step further this campaign and get their hands on the elusive piece of silverware. “I believe we can go one better this season and we’ll start that journey on Sunday.  The girls have been training hard, we’ve improved our squad over the close season and the chance of cup success is definitely achievable.”

Beveridge, in her fourth season at the Academy, is well aware of the dangers Rangers can pose. “They are a stuffy team and our results against them over the last few seasons show that we’ve always had to fight for any favourable result.  It’ll be a fiercely competitive game and the buzz in the changing room ahead of Sunday’s tie is incredible!”

The match kicks off at Noon.

Meanwhile, The Reserves head to Dumfries to take on Queen of the South Ladies in the opening Round of the 2nd Division Cup.