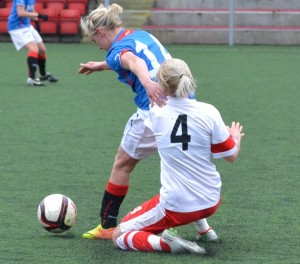 Spartans go west once again on Sunday as they take on Rangers Ladies, the second time the sides have met this month.

A Lana Clelland penalty was enough to separate the sides when they locked horns in the League Cup and Debbi McCulloch’s side return on SWPL duty as they look to build on last week’s opening day win against Hamilton.

For Spartans playmaker Trish McLaughlin, it’s a call for more of the same spirit that has seen a winning start to the 2014 campaign.

“On our last trip to Rangers I thought we played very well as a unit despite the depleted squad and with another positive result in the bag since, I’m confident we can pick up the points this time.

“It’s been a good 2014 so far, with a largely successful pre-season under our belt coupled with the increase in intensity and willingness to learn new things at training. This has definitely made us better prepared as a team for match day, where it matters most.”

The hosts, now under Head Coach Michelle Barr, opened up their league campaign with a 1-3 win on the road to Hutchison Vale and will be keen to make it a double over opposition from the Capital in as many weeks.

It all makes for an exciting and interesting game.  The match kicks off at 12.00 at Petershill Park.  Directions on how to get there can be found over here

Also on the road are the Reserves who travel up the M90 to take on Dundee City in Round 2 of the SWFL 2nd Divison Cup.