Brown downs Livi after Martin starting fight back for Reserves 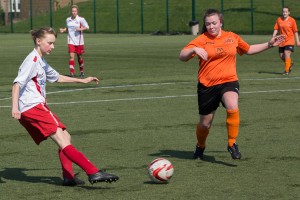 Spartans Reserves came from two goals down to win 3-2 against Livingston at the Academy on Sunday to make it three wins on the bounce for Walter McGill’s side.

Spartans started the brighter of both teams with several shots on target however they couldn’t find a way past the in-form Livingston keeper Lisa Muir who delivered a phenomenal performance over the ninety minutes.

Muir made a number of stops and double saves to deny a hungry Spartans strikeforce the lead.  Subsequently, it was against the run of play that saw the visitors go 1-0 ahead shortly before the interval.  It was a lead which they doubled within minutes of the second half restarting forcing McGill into ringing the changes.

A 50th minute triple substitution saw Kirsty Maden, Emma McNaughton and Heather Smart replace Jasmine McKay, Courtney Reid and Tracy Neill, which a serious ariel threat being introduced as Spartans looked for a way back into the match.

Spartans continued their assault on the Livingston goal and it took another series of wonder saves from the safe hands of Muir to prevent a way back into the game for the Ainslie Park outfit who were starting to show signs of frustration.

However, Livi’s luck could only hold the Spartans attack at bay for so long.  A quick-fire double from Frankie Martin delivered a hammer blow to the West Lothian side and the sides were suddenly level.

McGill replaced Helen Lyon with Laura McRitchie as he went all out to deliver the final knockout as the visitors looked vulnerable on the ropes.

The winner came with 15 minutes left on the clock.  Muir energetically saved what looked like a net bound strike however she could only parry it into the path of Lucy Brown who hammered the ball home to score her fourth of the season and grab her side a valuable victory.

Spartans Interim-Coach Walter McGill was impressed with his team’s efforts, “This was a complete squad performance, where every single player, on and off the pitch, played their part in the team’s success in winning this game.

“The attitude and resilience shown by the players through keeping their shape and belief when we went two goals down was key to our comeback.

“At no point did I or the players think the task was too big to overcome a two goal deficit.  This was an outstanding performance which is showing our group of players growing in stature as every week progresses.”