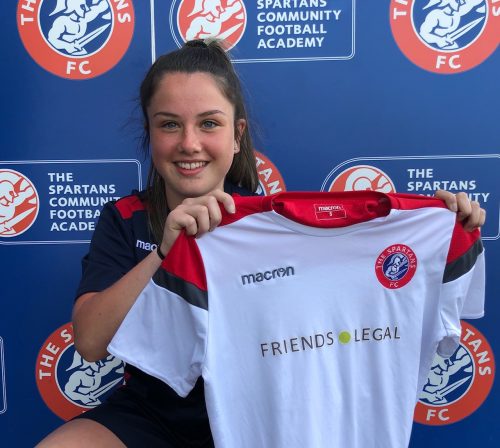 Caley Gibb has joined Spartans from Hibernian Ladies U23’s. The 15 year-old defender has previously played for Rosyth United Boys, Hillfield Swift Boys, Bayside Girls and most recently Hibernian where she has scored six goals so far this season.

Caley spoke exclusively to Spartans FC Women “I am delighted, and very exited, to start training and playing at a higher level and I feel so honored to have been given this opportunity as my dream has always been to play in SWPL 1 and become a professional footballer.”

“I’ve taken the decision to join Spartans because it’s a great club and I know the club will develop me as a player but also a person. I feel Spartans will give me the opportunity to be the best I can be and will support me in hopefully being selected for Scotland’s Under 17’s Women’s National Squad.”

“I want to improve myself, on and off the pitch, and will work tirelessly to get myself into the starting eleven.”

Manager Debbi McCulloch has been a big fan of Caley for several seasons now and is delighted to have captured Caley’s signature “Caley is a talented player. She can play full back, on the wing and also in the midfield so she is very versatile as a player. She has a great understanding of the game and is a real threat in front of goal. We’re all very much looking forward to working with her.”

Everyone at Spartans would like to welcome Caley to the club.