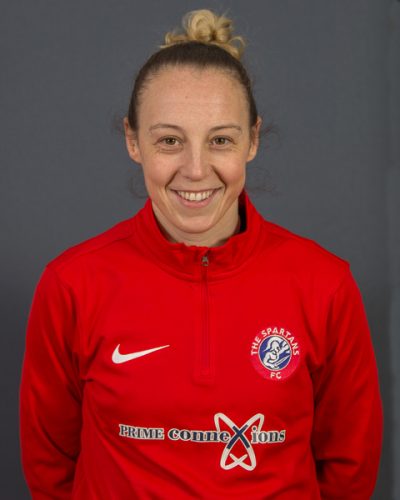 With an opening day draw up in Aberdeen together with the three points at New Douglas Park, Spartans remain undefeated in a tough start to the fixture card with a hat-trick of fixtures away from home in SWPL 1.

Marshall, who is in her second spell at the club following a stint playing in Italy, spoke of her delight at becoming only the 10th Spartan to reach triple figures.

The 29 year old said, “I didn’t actually realise it was my 100th game at the time however I’m absolutely thrilled at reaching the milestone.

“It’s great to be back, I love the Club and it’s a real privilege to be Captain. Leading the team out before every game is such a buzz but the winning is more important to me than anything else.”

SWPL 17 is Marshall’s seventh at Ainslie Park having joined midway through the 2012 campaign. The industrious playmaker is pleased with the start made by the side and promises that there is plenty more to come.

“To be honest, I don’t even think we’ve properly started yet. Our opening game in Aberdeen was a typically tough match against them on a challenging surface too and we were disappointed to lose the goals in the manner that they came about.

“Last weekend’s outing at Hamilton was a welcome three points however we have a lot more to offer and that starts this Sunday in the SWPL Cup Quarter Final in front of our home fans against Aberdeen.”

Marshall was as equal in her praise of the spread of goalscorers so far and the standard of defending from the young side.

“We’ve done a lot of work during training on our defensive drills and you can see how it is really paying off. In fact, none of the goals we have conceded have come from open play.  Hopefully we can build and maintain on this as the season progresses.

“It’s not just the usual strikers that are scoring the goals which is fantastic to see. It’s good to get different names on the scoresheet, from full backs to midfielders and the girls are not afraid to have a go in front of goal which is a great thing to see.”