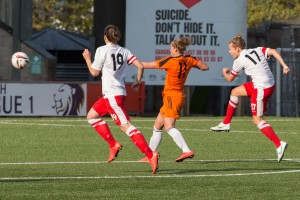 When Katie Reilly leads her side out at Broadwood Stadium on Sunday, she will be looking to make history by becoming the first Spartans Captain to lift the Scottish Cup in what will be the Ainslie Park side’s inaugural outing in the Final of Scottish Women’s Football’s showcase competition.

The road to the Final got off to a false start, with Spartans awarded a bye in Round 2 before they got their cup campaign up and running in style, sweeping aside Inverness City 5-0 at Ainslie Park. This set up a Semi-Final clash at Ravenscraig against Aberdeen.

“Some of the football we played in the second half of that game is by far the best that we’ve played this season and we were worthy of our 4-1 win”, recalled Reilly, “Hopefully we can take that into the Final against City and deliver the same outcome.”

It was Reilly’s 20-yard strike that secured victory against Sunday’s opponents back in September, the Glasgow side’s first domestic defeat in six years. Can history repeat itself and see Reilly get her hands on the coveted silverware?

“I hope so. We’ve know that we can beat them now and to be honest, we were close in the other two SWPL games this season too.  Everyone knows we can do it – so there’s no reason why we can’t do it again.  Glasgow City are a good team, but hey – so are we!

“I feel really proud of the team for everything the team have achieved this season and I think that the Cup Final is a combination of the work we’ve put in this year and we’ll be going all out for the win on Sunday.”

What will leading her team out onto the pitch at Broadwood feel like for the dedicated 28 year old who travels three times a week from her job as a Podiatrist in Perth to train at the Club’s Ainslie Park ground.

“I wasn’t playing in the league a couple of years ago, so having come back and playing for a club like Spartans it means quite a lot to me personally so there’s a huge sense of pride for me leading the team out on Sunday.”

With a packed Supporters Bus heading to North Lanarkshire along with a sea of Spartan Army faithful making their own way to the game, Reilly is looking forward to another fantastic reception from the fans.

“The support in the stand at Ainslie Park and on the sidelines around the country this season has been immense. The girls really appreciate it and hearing the fans cheering us on really does give us a lift. Hopefully on Sunday we’ll give our supporters, families and friends something special to celebrate and end the season on a real high.”