Carla gets the call-up for National u/19s camp weekend 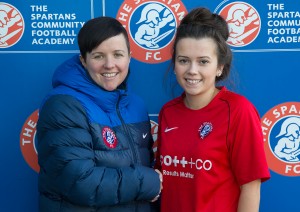 The close season signing will join the 22 player squad at a two-centre camp headed up by U/19s National Coach Gareth Evans.

Scotland face Germany, Belgium and Ukraine in their UEFA European Championship Elite Round, as they aim to reach the finals in Israel for the second consecutive year.

Spartans Manager Debbi McCulloch was delighted at the news.  “One of the main reasons we signed Carla was that she is a young and very talented player with a fantastic playing career in front of her.

“Her call up to the National u/19 camp is no surprise.   As she continues her post-injury rehabilitation, we will ensure that Carla has the very best of care on offer to aid with the final stages of her recovery process and we hope to see her in action wearing not only the Spartans jersey but the National colours in 2015 as well.”