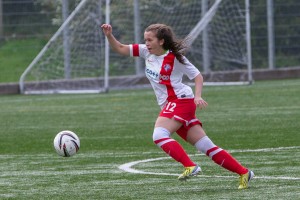 A last minute wonder-strike by Carla Jackson together with goals from Ronaigh Douglas and a rapid hat-trick from Sarah Ewens helped secure a Spartans victory in a nine goal thriller against Rangers at New Tinto Park.

Not only was it a dreich afternoon to kick-off the post-split Top 6 campaign, it was raining goals too and it took just 90 seconds for Rangers to score after a free-kick into the box by Chelsea Watson saw Rachel Harrison caught cold and Lisa Swanson capitalised to put the home side into an early lead.

Spartans were awarded a free-kick in the 9th minute after Rachel Halbert handled the ball outside the home penalty box.  The keeper was fortunate to escape with just a warning.

Harrison redeemed herself with a fine save from Katey Turner just before the half hour mark however the same Rangers player was to win the next duel to send the home side 2-0 ahead shortly after following a defensive lapse.

With ten minutes left until the break, Spartans grabbed a lifeline.  Louise Mason’s ball behind the Rangers defence allowed Ronaigh Douglas an opportunity to nip the ball past the advancing keeper before slotting it home.

Four minutes after the restart, Harrison’s long clearance was headed on by Douglas and Sarah Ewens unleashed an unstoppable shot that nestled into the back of the net to pull the visitors level.

The pendulum swung Spartans way three minutes later when Captain Katie Reilly’s pass was threaded through the eye of the Rangers defensive needle for Ewens to put Spartans ahead for the first time in the game.

An injury to Rangers keeper Halbert saw a break in play and she was eventually forced to withdraw and Jordyn Elliot took over between the sticks.  The substitute stopper’s first action of the afternoon was to pick the ball out of the net following a Ewens hat-trick goal from the penalty spot after Carla Jackson was upended in the box.

With 12 minutes to go, Michelle Russell replaced the industrious Douglas.  Moments later, the home side narrowed the lead after Hayley Sinclair beat Harrison with a well taken strike from 20 yards.

Rangers rallied and Katey Turner whipped in a telling cross into the box, only to find Suzy Shepherd’s outstretched leg inside the 6 yard box and the defender could only look on with agony etched on her face as the ball found the bottom corner of the goal.

With the game looking like it was heading to an already dramatic 4-4 draw, there was to be – perhaps predictably – another twist in the tale.

Carla Jackson collected the ball in the middle of the Rangers half, looked up and let fly from some 35 yards to score her first goal for the Club in sensational style and secure Spartans an invaluable three points on the road.

Speaking after the match, a delighted Carla Jackson said, “I had a few shots throughout the game that never went to plan but that one did.  I was going play the ball to (Louise) Mason but I thought I’d just go myself and I hit it and I was chuffed to bits that it went in.  It was a slow start from us today but I felt we were the better team in the end and we deserved it.”

The winning goal capped off a fantastic week for Jackson who was called up to the Scotland u/19 training camp.  “I’m delighted with that too after being out for such a long time – it’s been a good week for football!”

Asked about how the rollercoaster of emotions felt in the dugout, an ebullient Debbi McCulloch smiled, “I could’ve done without it, if I’m honest!”  The Spartans Manager added, “The first half hour was below the average we expect at Spartans but thankfully we were offered a lifeline before half-time by Ronaigh (Douglas).

“At the break, I asked the players to stand up and take responsibility.  They came out the second half all guns blazing and I was pleased with the response.  Sarah Ewens took great responsibility in front of goal today too with a well worked hat-trick.  Obviously at 3-4 nerves kick in and to be fair to Rangers, they changed their shape to cause us problems and we were unfortunate to concede the own goal.”

Speaking of the winning goal, McCulloch noted, “I spoke to Carla at half-time as I’ve seen her finish moves well at training and I told her that when you have a similar opportunity in the game, have a go.  She’s a special player and what a shot – a thoroughly deserved goal.”