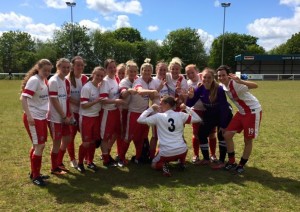 Spartans Reserves made their way along the M8 to Blackburn on Gala Day Sunday in their penultimate fixture before the summer break, writes Kayleigh McNeill.

Blackburn were first off the mark after a lack of communication at the back forced Charlotte Ferguson into a 1 on 1 save but unable to rescue the rebound in time to stop the home side taking an early lead.

Spartans kept their heads up after the early setback with Sophie Cunningham finding her stride down the right side before delivering a lovely cross that found striker Ashley Fish, who obliged by heading home her first goal on her first start for Lynsey Cowan’s side.

Just two minutes later, Nichola Sturrock put the Reserves ahead with her fifteenth goal of the campaign so far.

2 further goals in a five minute spell for the away side helped extended the gap between the sides ahead of the break.

Nichola Sturrock was in on the action again with a ball over the top of the Blackburn defence allowing Ashley Fish to slot home her second, this time with her foot.

Fish then grabbed her hat-trick from a well worked corner ahead of the interval.

Spartans kicked off the second half much as they had ended the first, in attack.  Emma McNaughton got in on the goal scoring action, chipping the keeper from just outside the box.

7 minutes later, Emma McNaughton was back in the Blackburn box using her height advantage to head in her second from another Nichola Sturrock corner.

It was a triple whammy for Blackburn from centre back Emma McNaughton who netted a career first Spartans hat-trick taking the total 7 with fifteen minutes to go.

Spartans took full advantage of another corner just before the final whistle with Ashley Fish showing no signs of stopping now that she’s off the mark.