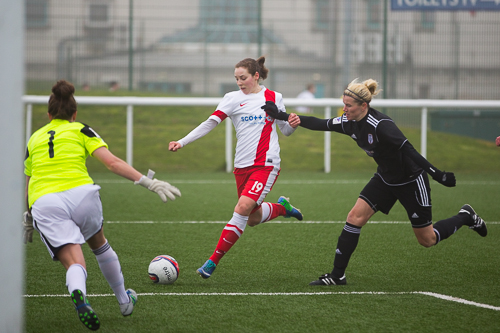 In what was a proverbial game of two halves, Spartans went down fighting in a 1-3 defeat against reigning SWPL champions, Glasgow City.

Sarah Ewens’ 44th minute penalty gave Spartans hope in what Manager Debbi McCulloch noted as a second half where her side were the better team.

Goal scorer Ewens herself came in for individual praise from the Manager. “Sarah worked extremely hard throughout the game, often up there at times by herself.  Whilst not our regular penalty taker, she’s had to take a couple now and what a fantastic record she has not only at this Club, but Sarah is probably one of the best natural strikers in the SWPL in my opinion.

Spartans got off to the worst possible start against the Glaswegians when Crichton’s unstoppable strike from the edge of the box flew past Harrison. 0-1

Trish McLaughlin worked hard to create an opening to test Alexander but whilst her shot had direction, it lacked the power.

It was 2-0 to the visitors after 15 minutes after Grant put an inviting cross into the box for Ross to slide home.

Ewens was unfortunate to be met by the laces of Alexander’s outstretched boot after she raced into the box, only for the keeper to make the save & turn the ball round the post.

Spartans hopes of maintaining their 100% record were made more difficult after Nelson’s header came crashing down after hitting the underside of the bar. The stand-side linesman raced to the centre circle to signal the ball has crossed the line. 0-3

On the stroke of half time, Spartans were awarded a lifeline in the shape of a penalty. A clumsy O’Sullivan challenge saw Montgomery land in a heap on the deck and the Referee left in no doubt as she pointed to the spot.

Sarah Ewens stepped up to the mark and sent Alexander the wrong way, marking her 100th competitive appearance with a goal.

Spartans were boosted by their late first half rally and started the second 45 minutes with fire in their bellies.

Despite the news that British Summer Time had begun, the fog and cold conditions made for a unwelcome conditions for players & supporters alike.

Ewens went on a mazy run down the line, before shaking off Whyte to produce a shot that was turned away by the City keeper.  Nicolson’s shot from the corner went wide.

With more of the 2nd half being spent in the City half, Montgomery had another attempt to break down the Glasgow defence in open play. Her shot well saved by the keeper.

A momentary lapse in the home defence almost allowed O’Sullivan an opportunity to increase the City lead. Harrison came out to narrow the angle and it was enough to see the Irish Internationalist shot go wide.

The tenacious Montgomery unleashed a fierce attempt to give her side late hope of salvaging a point however Dalziel through herself bravely in front of ball, taking the full force of the shot on her nose!

Spartans ended the game defending resolutely and despite no goals scored in the second half, the performance pleased Manager, Debbi McCulloch.

“We let ourselves down in the opening 25 minutes by making some errors but as the half wore on, we had a chance to pull something out of the hat.

“At half time we had an honest chat in the changing rooms with the players being asked to stand up and take responsibility. I thought they did that in the second half and we were the better team.

“Playing catch-up football is never ideal however City are a very talented side and always look dangerous when they attack but I felt we kept possession well and created a few chances.  On a different day, who know what the final scoreline might have been and I’m very proud of the performance the players put in today.”