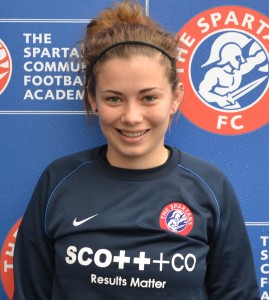 Spartans are delighted to announce the signing of Christie Kerr.

The teenager heads North following a move from Watford Ladies and joins Debbi McCulloch’s side with three games to go before the summer break.

The name Kerr is a familiar one around Ainslie Park, Christie’s mother Shelley was Player / Manager at the Club from 2008-2010 and called time on her Arsenal Ladies Managerial post recently with a FA Women’s Cup win against Everton.

Did this have an influence on Kerr’s decision to join the Club?  “I think so.  Not just because she was a player here, I’m not here to follow in her footsteps, but it’s always been a Club with a family ethos behind it and that was one of the main reasons behind joining now I’m back home.”

The 17 year old Student added, “I watched my Mum play when she was here and I always thought it was a good club to come to, with a great set-up and fantastic facilities.”

Kerr travelled to Aberdeen last weekend with the squad and watched her new team mates win 1-2 and the youngster is look forward to the challenge ahead.

“I’ve been out for a wee while with an ankle injury and it’s great to be back training and getting myself match fit again.  I know that Debbi will make me into a good player, I’m confident of that and she’ll develop me through training and game time.”

How has the new recruit settled in?  “The banter has been good and there’s a few characters in the changing room.  I think that’s what makes this team what they are and I’m delighted that Debbi has made it possible for me to be part of it.”

Speaking of the new signing, Manager Debbi McCulloch said, “I’ve known Christie for a long time and she is a talented young player.  When she approached me recently and asked if she could be join the Club I was more than happy to give her the opportunity.  As she continues her return from injury, we’ll be making sure she has game time with the Reserves in order to get her match fit again.”