Comeback Canuck boost for McCulloch ahead of Rangers tie 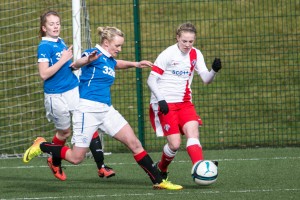 Spartans welcome Rangers to Ainslie Park on Sunday in their penultimate home match of the 2015 season.

In the corresponding fixture after the post-Top 6 split, the sides played out a fantastic nine-goal thriller at the home of Benburb Juniors where a stunning Carla Jackson goal earned Spartans a last gasp 4-5 win after being 2-0 down in the early stages of the match.

After last week’s derby defeat with her depleted side, Debbi McCulloch has received a timely boost ahead of Sunday’s clash with the return of Canadian playmaker Nicola Mawson.   Sarah Ewens has been working hard to recover from the injury received in the warm-up against Hibs although Dani Pagliarulo is unavailable.

On the Community Pitch at Noon, the Reserves take on Edinburgh Caledonia as they look to consolidate second place in the 2nd Division table.  Lynsey Cowan’s side will be looking to bounce back after their defeat against champions-elect Motherwell at Ravenscraig.