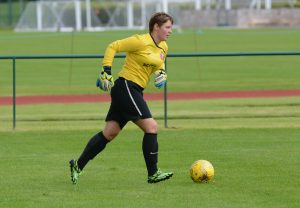 Spartans extended their unbeaten run to four games after a hard fought 2-2 draw away to Stirling University & Falkirk Ladies in the first SWPL 1 game back after the summer recess.

Faced with a changing room that would have delighted any tomato growers in town, Suzy Shepherd delivered her pre-match team talk in the relatively more comfortable surroundings of the pitch, giving her players more time to familiarise themselves with a grass surface – something the team haven’t played on since May.

Referee Andrew Strang got the game underway, minus any Assistants on the midgie-infested touchlines, as Spartans looked to build on the momentum gathered at the end of the first half of the season.  The hosts were keen to kick-start their campaign, starting the day rooted at the bottom of the table.

Spartans Captain Katie Reilly almost landed an audacious 40 yard effort in the back of the net shortly after the opening whistle, but a backtracking Chloe Logan done just about enough to stop the ball going over her head.

As the rain made an unwelcome appearance, Louise Mason delivered a deep cross into the box for Alana Marshall to collect.  The angle offered wasn’t overly favourable for Marshall who saw her effort flash wide of the target.

It was the same provider who saw her 31st minute in-swinging corner find the head of captain Katie Reilly who directed her header beyond the Logan to give Spartans the lead.

The home side were awarded a free-kick ten minutes later as they pressed for an equaliser before the break.  The dead-ball effort was knocked into the path of Jade Gallon who saw her strike hit the wall and go behind.  With the players looking to set up for a corner, the Referee offered Spartans a little reprieve by awarding a bye-kick, much to the audible bemusement of the excitable home bench.

However, they were to be rewarded on the stroke of half-time when Rachel Donaldson nodded a corner home to level proceedings.

The hope of a Christmas Card later in the year for the man in the middle diminished further just seven minutes after the break when Alana Marshall ‘played the whistle’ after a cross into the box found her in space at the back post.  With the home side channelling their energies in remonstrating with the Ref for offside, the Spartans playmaker kept her composure to tuck the ball home to regain the lead.

With No.1 stopper Eartha Cumings on a school trip and replacement keeper Jo Viollaz back home in France for the summer, the gloves were filled by the on-loan shot-stopper Corrie McIlravey.  The regular Jeanfield Swifts goalie, a familiar face amongst many of the Spartans side, was to keep her temporary team-mates in the game in a manic four minute spell.

Her first significant imprint on the game was to get down low to save well from Nicola Pullar.  Five minutes later, it was a chance to be a hero when faced with Jade Gallon looking to beat her from 12 yards out.  The penalty hit the inside of the right hand post before it was somehow halted by the face of the unsuspecting stopper on the line before being hoofed to safety.

The reprieve was to be short-lived by Suzy Shepherd’s side when, with just nine minutes left on the clock, Nicola Pullar capitalised on a defensive error to race in on goal before despatching home to make it all square for the second time.

Alana Marshall almost sneaked it as the game entered additional time however he rasping shot was well saved and turned behind by Chloe Logan.