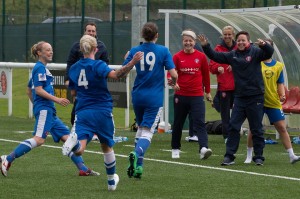 Spartans Manager Debbi McCulloch has spoken of the pride in her side’s performance following their 3-1 win over Edinburgh rivals Hibernian Ladies in Sunday’s SWPL clash.

A route-one strike from Ciara Barnes sandwiched between goals from Sarah Ewens saw Spartans claim the first of the derby bragging rights of the 2014 season at a wet and wild Ainslie Park.

McCulloch said, “We knew Sunday’s game was going to be a difficult one however we’d worked hard the previous week at training on a number of specifics, many of which focussing on our opponents and their style of football.

“We were a wee bit uncertain as to what shape they were going to play and they started in a more defensive line-up and I felt we stuck to our game plan very well to press them hard and it paid off with the win.

“Over the last few weeks we’ve looked very sharp and particularly so in our counter-attacks where we’ve looked dangerous at every opportunity.  We’ve got such great pace on the wings just now and the girls battled hard in what was a physical encounter from both sets of players – something you’d expect in any derby match.

“Hibs of course were reduced to 10 players early in the second half, then finally down to 9 however they scored one ‘World Cup’ quality goal whilst still having a full compliment of players on the park and I think Rachel only had one other save to make during the rest of the game.

“I reckon that if you’d looked at the beginning of the season with our challenging start and look where we are now, we’ve progressed significantly in a short space of time.  The blend of the team and the depth of the squad, even with the injuries we have shown what we are capable of.

“We’ve got momentum at the moment however we continue to keep our feet on the ground as everyone knows that can change very quickly and our target remains to secure a top 6 spot come the split at the end of June.”

Confusion surrounded the recipient of the second goal of the afternoon with the Ewens getting the initial nod.

Over to the Gaffer to clear it up, “The Referee awarded Ciara the 2nd goal as she adjudged the ball to have crossed the line before Sarah booted the ball into the back of the net.

“The weather conditions played a significant part in the game today.  The pitch was wet and it was quite windy with the ball bouncing really high for some strange reason and it went straight over their keeper’s head however it great instinct from Sarah to be following it up.”