Derby day blues as Spartans are gone with the wind 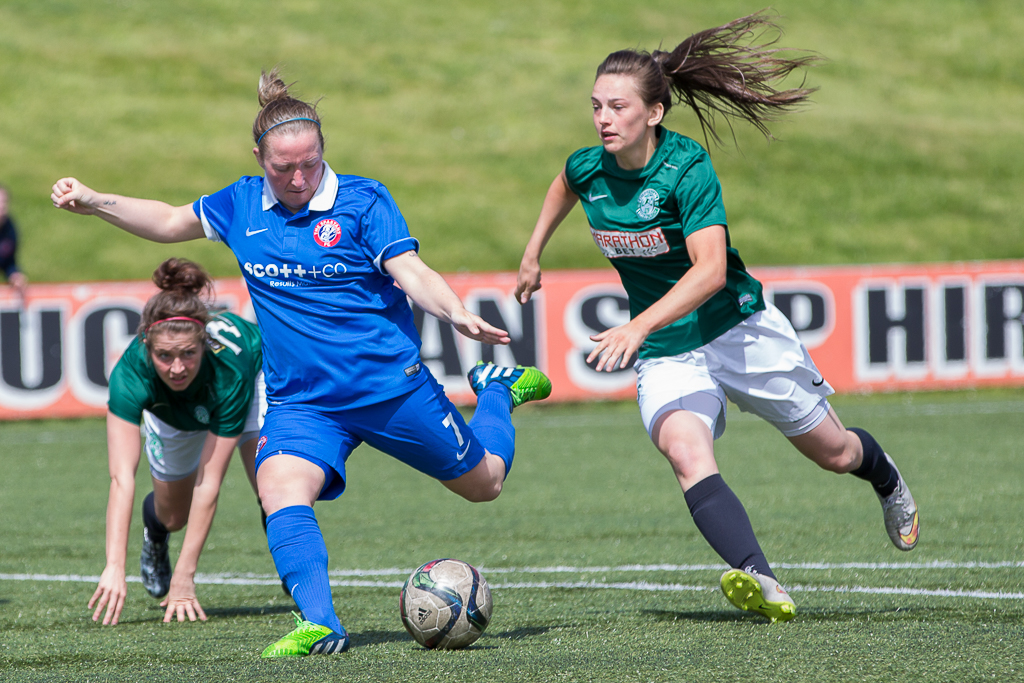 Spartans fell to a 3-0 scoreline that flattered the hosts at a blustery Albyn Park on Sunday as Hibs won the opening SWPL Edinburgh Derby of the 2015 season.

Louise Mason become just the 8th player to pull on the Spartans jersey for the 100th occasion in a side that saw the return of Kirsty McLaughlin to the starting XI.

The Broxburn wind machine was switched to high as kick-off, with the conditions set to have an impact throughout the course of the 90 minutes ahead.

It was the home side who took the lead in the 9th minute after Lizzie Arnot saw her shot well saved by Rachel Harrison only for the rebound to eventually find Heather Richards who slotted the ball home from close range.

The first half continued to huff and puff but it was only the wind that was blowing anything down as neither side troubled their opponent’s danger area.

Tenacious play towards the end of the opening forty five minutes by Ronaigh Douglas opened up an opportunity for Louise Mason however her long range effort was saved by Fife.

Spartans, under the watchful eye of coach Jimmy Burns whilst Debbi McCulloch continued her A Licence residential course, came out of the second half trips flying.

Fine link-up play between Sarah Ewens and Michelle Russell in midfield gave Kirsty McLaughlin a chance at the edge of the box, her turn and shot gratefully received by the welcoming arms of Fife.

With Spartans dominating the early exchanges, it was Hibernian who doubled their lead with 58 minutes gone against the run of play. Arnot capitalised on a long ball through the middle before sliding the ball past Harrison.

Burns made a further substitution, introducing Morgan Mitchell for the industrious Ronaigh Douglas. The teenager hunger was akin to a pre-race starved Greyhound who didn’t give up chasing all afternoon.

As analogies go, football can indeed be a cruel sport at times and with eight minutes left of a game played in fine spirit, a cross into the Spartans box was turned into her own net by the head of Katie Reilly.

With almost the last play of the game, Rachel Harrison had to look sharp to push a wind-assisted long range shot over the bar as Hibernian looked to add to their total.

Meanwhile, the Reserves turned on the gas at Blackburn with Ashley Fish finding the net four times in an 8-1 win.  Emma McNaughton grabbed her first ever hat-trick during the emphatic victory with Nichola Sturrock getting in on the goals too.