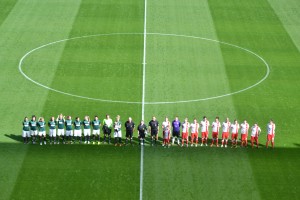 Hibs Ladies made it one win apiece in this season’s Edinburgh Derby series with a 2-0 victory over Spartans at Easter Road.

Both sides set out looking to utilise the channels on a pitch that boasts an extra six yards in width than the Ainslie Park surface.  Spartans enjoyed some fine early possession however they couldn’t find a way past Hannah Reid in the Hibs goal.

Rachel Harrison, in her 100th appearance for the Club, was the busier of the two goalies in the 1st half, pulling off a fantastic 20th minute save to deny Katy Turner.  The Spartans keeper got down low to get enough of her fingertips to the ball to push it past her left hand post.

When Lizzie Arnot broke the Spartans offside trap it looked like the Hibs player was set to break the deadlock however she didn’t count on the advancing Harrison who raced out of her box to put in a central defender style tackle to send the ball to safety.

Hibs took a 25th minute lead after Arnot and Robertson combined down the wing before the latter crossed into the danger zone.  Harrison got down low and looked to have cancelled out the danger however an uncharacteristic spill allowed Lucy Graham the simplest of tap-ins.

Both sides continued to spread the ball about the vast arena however neither could make any further impact on the scoreline in the opening forty minutes.

Spartans were dominant after the break as they searched for an equaliser.

Claire Crosbie’s 57th minute 25 yard strike was closer than Hibs keeper Reid perhaps thought as it whizzed past her post.

Two minutes later it was the turn of Sarah Ewens to cause the Hibs defence trouble.  Facing a plethora of green shirts between her and the net, she knocked the ball past her marker before unleashing her shot that went agonisingly close to drawing the sides level.

At the other end, Lizzie Arnot outpaces Danni Pagliarulo before unleashing a shot that hits the outside of the post before bouncing back into play.  Robertson blasts the rebound well wide as Spartans breathed a sigh of relief.

Pagliarulo won the next battle with Arnot, a no-nonsense challenge in the heart of defence as Spartans pushed forward in search of an opening as the game opened up.

A 73rd minute substitution saw Louise Mason replace Katie Reilly who had moments earlier been on the receiving end of a challenge in midfield where she had been unceremoniously flattened.

Steph Briggs took a knock in back play.  She reappeared after treatment however she couldn’t continue and was replaced by Ronaigh Douglas.

With five minutes left on the clock, Sarah Ewens came desperately close with a thumping drive from a full 25 yards that took the paint off the Hibs crossbar.

Then, as the game entered the 4th minute of injury time, Rachel Walkingshaw’s dipping drive from long range outfoxed Harrison and it nestled into the back of the net.