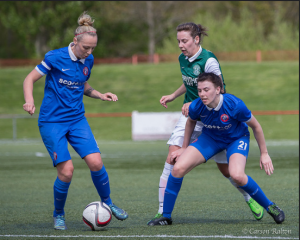 Despite spirited and honourable performance from Spartans, it was Hibernian who came away with three points in last weekend’s SWPL Edinburgh Derby at Albyn Park.

With Katie Reilly unavailable, the coveted Captain’s armband was handed to Alana Marshall whilst there was a return to the side for youngster Ellie Simpson for her first start of the campaign. Meanwhile, there was a spot on the bench for Christie Kerr who returned to Ainslie Park earlier in the week.

The match got off to a frantic start at the West Lothian ground with both sets of players having to deal with the unpredictable sunshine throughout the 90 minutes in an afternoon where sunglasses and woolly hats were a welcome combo on the sidelines.

It was the hosts who broke the deadlock in the 12th minute after Lucy Graham headed home from a cross that left Eartha Cumings with little chance.

Despite some tenacious play by Simpson and a resilient display by the back division, Spartans were unable to level proceedings before Hibernian doubled their lead ahead of the break.

Cumings pulled off a terrific stop however the rebound was bundled home Sarah Ewens from close range. Despite loud appeals for offside from the visiting defence neither official could be swayed otherwise.

On the hour mark it was Hibernian who grabbed what proved to be a decisive third goal of the afternoon. As Spartans pushed to get back into what was a fairly even game despite the outcome at the break, a fine strike by Chelsea Cornet left Cumings with little hope of a save to extend their lead.

Five minutes later it was the head of Siobhan Hunter who nodded in the fourth and final goal for a Hibernian side who will be at Ainslie Park next month in League Cup Final duty.

Bobby Beveridge then replaced the hard working Ellie Simpson who chased every ball like a wound-up Border Collie in the park.

With twenty minutes to go, Danjiela Rae made a welcome return to proceedings after picking up an injury in pre-season.

Suzy Shepherd made her final replacements with 83 minutes on the clock, with Christie Kerr making her first appearance since her return and Joanna Viollaz taking over between the sticks, as they traded places with Jen Malone and Cumings respectively.