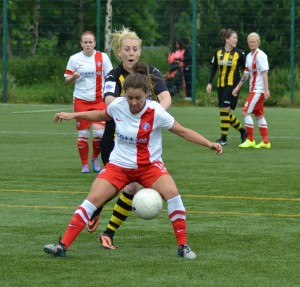 Spartans ended the first half of their SWPL campaign with a disappointing derby day defeat to Hutchison Vale at Saughton Enclosure.

Goals by McLaughlin and Reilly at the end of both halves were all Spartans had to show for their efforts in a game that saw the hosts utilise the counter-attack option effectively to win 4-2.

The defeat, coupled with results elsewhere, ensured the Ainslie Park side would re-start after the summer recess in 5th place.

There was a shuffle in the Spartans pack ahead of kick-off after top scorer Sarah Ewens failed to shake off a knock and started on the bench.

Both sides were subject to an interesting warm-up session as they were forced to take an end each of the adjoining 5-a-side pitch as a game played out on the main pitch.

Spartans started the livelier and an early chance saw Katie Reilly split the Hutchie defence to find Trish McLaughlin who crossed into the box for Louise Mason to agonisingly push the ball wide.

Reilly was unlucky with a header as the aerial bombardment continued to rain on the Vale goal however the opener eventually came in the 30th minute and it was against the run of play.

Michelle Russell got in behind the Spartans defence to stroke the ball past the exposed Rachel Harrison to put the home team in the lead.

A quick response was required however Reilly’s header was well saved by Ashley Watson and the stramash that ensued in the six yard box saw Danni Pagliarulo’s shot hit off a sea of bodies before the ball was hoofed away to safety.

On the stroke of half-time, Ashley Nicholson’s cross was turned home by Trish McLaughlin from close range, sending the sides in level at the break.

Fantastic skill and strength by Ronaigh Douglas saw the youngster skip past her marker and her searching cross along the 6 yard box was put past the post by the unlucky Mason.

Three minutes later however, disaster struck.  Ciara Barnes saw her loose pass-back collected by Russell who rounded Harrison to grab her second of the afternoon to give Vale the lead.

Worse was to follow a few minutes after.  Pagliarulo was robbed in her own red zone area and Rebecca Galbraith composed herself to beat former team-mate Harrison to extend her side’s lead.

A third goal in ten minutes secured a win for the hosts, coached by former Spartans Men’s Saturday Amateur’s Andy Enwood, when Barnes saw her attempted header back to Harrison fly past the keeper who had advanced out of her area, perhaps to clear the danger herself.  The ball was collected by the grateful Galbraith who slotted the ball into the empty net make it 4-1.

Donachie replaced Nicolson with five minutes to go as Spartans looked to salvage some pride from their performance.

That came on the final whistle when Captain Reilly pulled a goal back however it was scant consolation for her side who finished 5th in the pre-split table.