Dons and dusted. Spartans bow out of League Cup 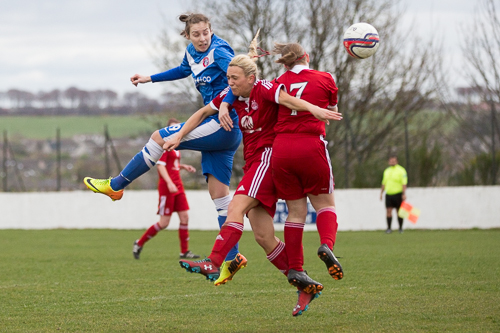 Spartans lost out on the road ending their League Cup hopes for the season with a narrow defeat against Aberdeen.

In what was a fractious and frustrating stop-start game, it was the home side who progressed into the semi-finals with a 2-1 win at Sunnybank.

Small almost snatched an early lead for the hosts after a defensive clearance ricocheted off the Referee into her path however her attempt went wide of Harrison’s goal.

It was Aberdeen who took the lead after 14minutes from a set piece.  A lapse in the visitor’s defensive rear-guard saw an in-swinging corner headed into the net by Melissa Aitkenhead.

Spartans looked to get back into the game almost immediately, with McLaughlin crafting an opening for a strike at goal, bringing out a save by Sangster.

Sarah Ewens brought Spartans level in the 25th minute.  Alana Marshall unleased a ferocious strike from the edge of the box which Sangster failed to hold onto, Ewens reacting first to nip in and force the ball home. 1-1

Harrison pulled off the first two top class saves when she denied Dempster from a free-kick from 20 yards.  The keeper then stopping Small from regaining the lead after the Dons player nipped in behind the Spartans defence.

As the game looked to be heading to half-time all square,  the home side scored what was to turn out to be the winning goal.

Stewart found herself inside the Spartans box after the possession was lost in midfield.  The ball broke to Dempster who brought out another fine save from Harrison.  The keeper could only take the sting out of the shot and Campbell was on hand to send her side 2-1 up at the break.

An aerial 50/50 challenge between Kerry Montgomery and Sangster saw the Aberdeen keeper come off second best and she needed a few minutes of treatment before continuing.

Ewens came close to equalising in the 63 minute when she slipped her marker and sent an ambitious snapshot onto the bar from 12 yards.

Sophie Cunningham replaced McLaughlin after 70 minutes as Spartans searched for an equaliser.

Danni Pagliarulo searched for a lifeline with 7 minutes left on the clock, earning a free-kick on the edge of the box after being wrestled to the ground.  Nicolson’s dead ball strike cleared the defensive wall but unfortunately the crossbar too.

A last throw of the dice from the opposition bench saw Ciara Barnes come on for Shepherd with five minutes left on the clock.

Unfortunately for Spartans, time run out and it was Aberdeen who progress into the last four of a competition that hosts it’s Final at Ainslie Park.