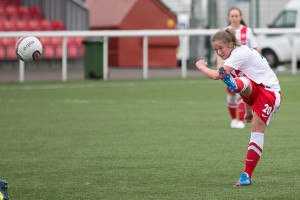 Spartans got their 2015 SWPL campaign off to a winning start with a convincing 5-0 victory over Forfar Farmington at Ainslie Park.

A double from Sarah Ewens and strikes from Louise Mason, Trisha McLaughlin and a first goal in Spartans colours for Michelle Russell gave Debbi McCulloch’s maximum points on the opening day of the season.

Spartans kicked off the game attacking the Café and looked hungry and within the opening few minutes, Katie Reilly & Alana Marshall both came close to breaching the Forfar defence.

It took half an hour for the rampaging Spartans attack to finally open the scoring with Sarah Ewens using her pace to glide past her marker before sliding the ball past McNicoll in the Forfar goal.

Just four minutes later, Ewens doubled her rally and the team’s lead. Reilly threaded the ball to Ronaigh Douglas, the teenager showing admirable honesty in the box to stay on her feet before squaring the ball to Ewens who slotted home.

On the hour mark, McCulloch made a double substitution, with Russell & Kirsty McLaughlin replacing Danni Paglirulo and Douglas.

Within sixty seconds of coming on to the park, Michelle Russell got her head to a Mason corner kick and nodded the ball into the net to open her account.

Two minutes later, Louise Mason turned from provider to finisher – and in some style. Marshall won the ball in midfield before pushing a square pass to Mason who advanced into the box before calmly lifting it over the keeper for the fourth goal of the game.

Manager McCulloch may stake claim to a piece of tactical genius as just like Russell, the substitute was on the score sheet just moments after her introduction.

Trisha McLaughlin collected the ball out on the touchline before flat-footing her marker by cutting back inside to shape up a chance to hammer the ball past McNicoll.

A fine double save by McNicoll, by far the busier of the two keepers, denied Ewens her hat-trick as the game entered it’s latter stages.

At the other end, Rachel Harrison was called into action for the first time and she had to look lively to push a Holly Napier shot round the post.

There was to be no consolation goal for the young Forfar side who kept at it til the final whistle.

After watching her side get off to a winning start, Manager Debbi McCulloch said, “We made great strides last season to cut down the goals conceded, so to keep a clean sheet is as equally satisfying as watching them go in at the other end.

“Yes we could’ve scored more but at the end of the day the performance was satisfying and everyone gave their all against a Forfar team that sat quite deep in against us and that’s tough to break down at times.

“It’s good to see that there are people on the bench who can come on and make an impact.  Michelle scoring with her first touch of the ball from a header from a set piece and a very composed finish from Trisha was pleasing to watch.  That on top of Sarah’s double which will be good for her confidence and Mason’s well taken strike, it’s nice to see the goals being spread around the team – it’s important.”