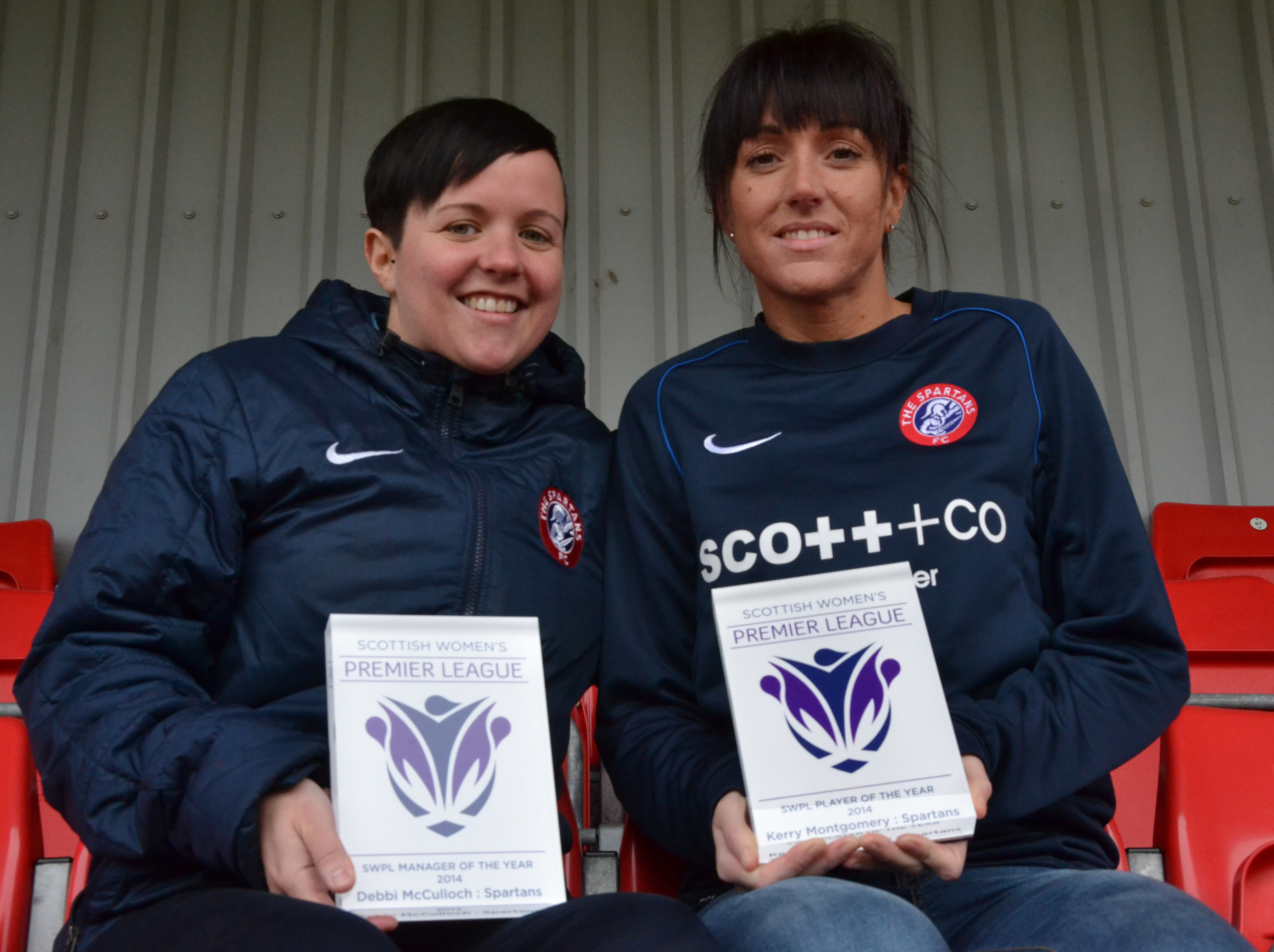 Spartans duo Debbi McCulloch and Kerry Montgomery were the toast of the SWPL as they collected the 2014 Manager of the Year and Player of the Year Awards at their Ainslie Park ground.

Scotland Women’s National Team Manager Anna Signeul was on hand to present the pair with their Awards as voted on by their SWPL peers across the land.

2014 saw McCulloch take her team to their inaugural Scottish Cup Final whilst they finished 4th in the SWPL, during which they became the first team in some six years to defeat Glasgow City in domestic competition. 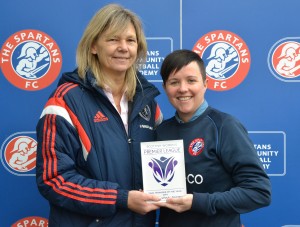 Speaking after receiving her award from the Scotland National Coach, a smiling McCulloch said, “It feels great, I’m not going to lie. I’m extremely honoured and fairly surprised at the same time, but I’ve worked extremely hard this season – harder than any other before.

“I’d like to thank everyone who voted and it’s a great achievement not only for me personally, but also for the Club too.”

McCulloch is not only the Manager of the Year but the only female leading one of the 12 top flight clubs.  Could winning the award be the catalyst in encouraging more females to take up coaching?

“It would be great to think that by winning this award it will encourage more females to get involved.  It would be fantastic if we were to have more female coaches in the SWPL too,” said a hopeful McCulloch.

“I’ve always respected the fact that Walter (McGill – Chairman) and Carson (Ralton – General Manager) and everyone else at Spartans have wanted a female in charge of the team as they feel it’s important to create female role models.

“There have been several females on my SFA B Licence course this year which has been fantastic to see. There are certainly many talented females involved in Scottish football who are able to apply themselves and add something to the game.  Also, with being a female coach, you can build better relationships with the players and develop a better understanding.

“I’ve certainly found that a big part of the role is managing people.  The technical and tactical part of the game is of course important however you have to be able to manage people.  I think if you are in charge of a group of ladies and you are also female, then you do have a slight advantage.”

One of the players McCulloch has managed, with some success it seems, is Kerry Montgomery. 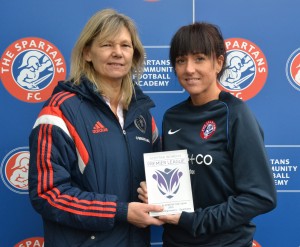 Montgomery picked up the Player of the Year prize after topping the four-strong short-list of players, voted for by fellow players across the divisions in Scotland.   Fellow Spartans team mate Sarah Ewens, Glasgow City pair Jo Love and Denise O’Sullivan were also nominated.

An ebullient Montgomery admitted afterwards that she was “amazed to have even made the shortlist” against a strong field of potential contenders for the coveted award.

The playmaking midfielder who has netted 12 times in 26 games this season said, “I was genuinely amazed to have even made the shortlist, so to hear I’d actually won it was a bit surprising! Also, to be recognised by your fellow players is a brilliant feeling too. I am really grateful to all those who voted for me – I’m absolutely delighted.”

After making her debut for the SWPL side in 2012, the 26 year old has had a successful first full season at Ainslie Park which resulted in a call-up to the Scotland National set-up, including a place in Anna Signeul’s squad for their friendly v Wales in August.

It’s the second award in less than a week for Montgomery after she picked up the Spartans Coach’s Player of the Year Award at the weekend.  Was this the best season in her football career so far?  She smiled, “Without a doubt yes. It’s been a surreal year however I’ve worked really hard and made sacrifices along the way so to be awarded in return makes it all worthwhile.”