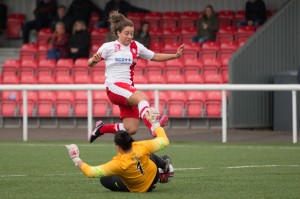 Spartans extended their unbeaten run with a comprehensive 4-1 victory over Celtic that guarantees Debbi McCulloch’s side a minimum 4th place finish with one fixture remaining.

Doubles either side of the interval from Louise Mason and Katie Reilly earned Spartans a fourth SWPL victory in a row in front of a vocal home support at a chilly Ainslie Park.

Before the start of the game, both teams lined up to show their support for the Show Racism the Red Card annual fortnight of action, which involved all Clubs in Scotland making a stand against racism in football and society.

The game got underway with Claire Crosbie starting her 131st game for the home side, a new club record for appearances.

Spartans took the game to Celtic, keen to make amends for the two defeats against the Hoops earlier in the campaign. It didn’t take long before Alana Marshall and Louise Mason were tormenting the visitors down their respective channels and Gemma Fay had to look lively in the Celtic goals early on.

The sustained pressure paid off for Spartans in the 28th minute when Mason robbed a Celtic defender of the ball before composing herself to drill firmly into the bottom corner, giving Scotland keeper Fay little chance.

Mason grabbed her second of the afternoon in the 35th minute with a fantastic piece of individual skill to come back inside her marker before executing the strike that landed in the same spot in the net as she’d found minutes previously.

The second half started at a less frantic tempo and it took a while for both sets of players to kick-start a game that saw Spartans almost exclusively enjoy possession.

The biggest cheer of the afternoon was reserved for the Firemen who had finished attending a call at the nearby flats. A well lofted clearance by a Celtic defender flew over the boundary fence and a friendly fireman rescued the day by recovering and returning the ball.

Back to the game and Spartans looked to extinguish and fire left in the Celtic engines. Kerry Montgomery linked up with Mason in midfield before releasing Sarah Ewens into the box, only for Fay to claw the ball to safety.

Spartans extended their lead further in the 67th minute when Katie Reilly pounced on the ball inside the Celtic box before unleashing an unstoppable drive that left the keeper with no chance.

Lana Clelland was unlucky moments later when she tore through the heart of the Hoops defence before she saw her audacious effort from long range cannon off the crossbar and back out to a thankful Celtic defender who hoofed the ball to safety.

It was game over in the 76th minute when Spartans added a fourth.  Clelland’s shot saw Fay swoop down low to save, she could only palm the ball away but recovered well to deny Sarah Ewens converting the rebound however there was to be no third time lucky for the Celtic No.1 as Katie Reilly rammed the ball home.

In a rare excursion into the Spartans danger zone, Celtic grabbed an 85th minute consolation effort after the ball got stuck under the feet of substitute Ciara Barnes and the lively Chloe Arthur capitalised by lobbing Rachel Harrison to score.

Post-match, an ebullient Louise Mason was glad to gain another three points and with it, become the only side to have won over each Top 6 rival this season.

“Top 6 football means difficult games each week and there will be those on the outside who wouldn’t have expected us to win the Rangers game, probably the City game and even today’s fixture as we hadn’t won against Celtic so far.  But we’re confident.  The atmosphere in the changing room is electric and we have gelled well as a unit to set up a successful end to the season.”

When asked to talk through her goals, Mason laughed, “For the second one, Debbi is always saying about me coming inside and hitting it over the bar, so it was good to keep it down – and score!”

Manager Debbi McCulloch added, “I’m delighted with another win, our fifth victory in a row, with lots of positives to take out of today’s game ahead of next week’s Scottish Cup semi final.

“I was giving (Louise) Mason a hard time for the opening 15 minutes as I felt she wasn’t really in the game and being as effective as I’d liked her to have been, but then she rightly shut me up and scored two fantastic goals.

“I felt we lost our way early in the second half and lost our rhythm a little bit, but two great strikes by Katie (Reilly) saw us home and dry to ensure that we continue to finish this season strongly.”