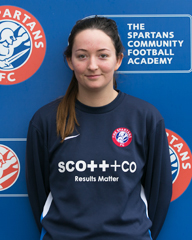 Spartans Reserves made the journey East to sunny Port Seton to face basement side Seton Ladies in the latest round of their SWFL campaign, writes Kayleigh McNeill.

Head Coach Lynsey Cowan made a few changes to the side that defeated Claremont last time out, with a place in the starting line-up for striker Sarah Shaw (pictured).

Shaw almost marked her first start of the season with a goal within two minutes, coming close to opening the scoring with Chelsea Neil on hand to put the ball into the net to send Spartans on their way.

Five minutes later, Nichola Sturrock waltzed her way through the Seton back four and ended her mazy run with a fine lob over the keeper to double the Ainslie Park side’s advantage.

It was to be double trouble from the seasiders and Chelsea Neil was the first to grab a brace after tenacious play in midfield saw her rob a Seton defender before confidently slotting the ball past the keeper to make it 3-0.

Lucy Brown continued to work hard down the right wing and with a burst of pace and perfect cross into the box, Sarah Shaw rattled home her well deserved first goal of the season.

A confident run from inside her own half saw Jess Nimmo brought down unfairly by the chasing defence in the box, leaving the Referee with no other option than to point to the spot. Sturrock stepped up and recorded her second of the afternoon.

Seton were looking for respite in the shape of the half-time interval from a rampant Spartans side however they were to lose another goal in the last play of the forty five when Sarah Shaw slotted the ball under the keeper.

Lynsey Cowan made a couple of changes at the break to bring fresh legs into attack and also to offer valuable game time to her squad.  The impact substitutions paid off almost instantly as Sophie Cunningham used her bursting pace to its full advantage down the left wing, finding Ashley Fish who opened her account for the day.

Sophie Cunningham finally got her reward for the hard work throughout the game to scoring two goals in quick succession, including a well taken second after lifting the ball over the scrambling keeper to make it nine for the away side.

With both teams now working a high defensive line, there were almost as many offside traps as goals on the day however it was Ashley Fish who found her way into Port Seton net to finish the scoring with a fifth and final double of the afternoon.

The result keeps Spartans in second place, two points behind leaders Motherwell, who have a game in hand.  Next week, the Reserves are at home to Partick Thistle with a noon kick-off.