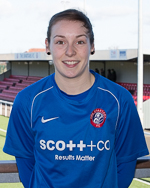 Spartans picked up another important three points and a welcome clean sheet in an 11-0 win over Inverness City at Ainslie Park.

The win delighted Captain Katie Reilly who described the performance as a “tremendous team effort where everyone played their part.”

Ahead of the match, there was a morale boosting sight for everyone involved at the Club when Claire Crosbie took part in the warm-up as she continues her road to recovery.

An early double from Alana Marshall sent Spartans on their way.  Her first in the 8th minute was a fantastic piece of individual skill, turning her marker before unleashing a tremendous strike which left Jappy with no chance.

Inverness had the chance to draw level almost before the home side had finished celebrating the opener.  Nichol burst into the box however her shot could only find Harrison’s side netting.

Marshall’s 2nd goal was one of sheer opportunism.  Finding herself out wide, she looked up and struck the ball high and over the City keeper when others perhaps anticipated the cross.

Louise Mason turned provider for the Spartans 3rd when she broke up the touchline before her inch perfect cross was tapped home by Kerry Montgomery.

Worse was to follow for the Inverness side when they lost the services of Becky Dingwall who was shown a straight red by Referee Clark after stopping a goal scoring opportunity with her hand.  Sarah Ewens obliged by slotting the penalty home.

Montgomery added another when her thunder strike was too hot to handle for Jappy who could only parry the ball into the net.  The same player completed the first half scoring with the final move, a header which left the goalkeeper no chance.

Ronaigh Douglas replaced Louise Mason at the break, giving the teenager her 5th appearance of the season so far.

In what was a less frantic second forty-five minutes, Spartans added three additional goals to their tally. The first came in the 55th minute after Marshall was taken down in the box by Rachel McLauchlan and Ewens grabbed her second from the spot.

A further substitution by McCulloch saw Stephanie Briggs come on in the 67th minute for Tracey Donachie.

Danni Pagliarulo’s well placed header with twenty minutes left on the clock saw Spartans reach double figures.  The scoring was complete in the 76th minute when Ewens looked sharp and cut in front of the static defender to guide the ball home.

Captain Katie Reilly was full of praise for her team mates after the match, “I thought today was one of our best footballing performances this season so far.  Everyone played their part today and despite the result on paper, Inverness are a good side however I felt that we have stepped up our game over the few weeks and have executed our game plan effectively.”

Manager Debbi McCulloch, “Some may look at the scoreline and think it was an easy game today but that would be unfair on Inverness.  I think we are playing exceptionally well and are playing some fantastic football this season.

“The sending off changed the game a little bit and if I’m honest I thought the red card was perhaps a little bit harsh on Becky as I don’t think she could’ve done much about it but by the letter of the law, the Ref had to make a decision.

“It’s great to see Sarah scoring as many goals as she has so far this season and Kerry has been working hard to get on the score sheet regularly too. When you also look at things like Trisha McLaughlin scoring with her head today, these things probably wouldn’t have happened last season and we’ve started to blend well with a squad that offers flexibility to give options right across the board.”