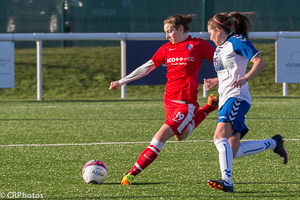 Spartans continued their pre-season winning ways with a 4-3 victory over English Super League 2 side Durham at Ainslie Park.

A brace from Sarah Ewens helped Spartans secure their second warm-up win against a strong North East outfit who offered a physical challenge in what were cold conditions in the Capital.

Last season’s leading goal scorer at the Club was happy with the outcome, “I thought we played well today against a fairly physical side.  It’s great to get another win and we’ll continue to use pre-season to iron out any mistakes ahead of the season starting.”

Debbi McCulloch welcomed back Lana Cleland into the squad and the Scotland Internationalist only had to wait 4 minutes before coming off the bench to replace the injured Alana Marshall.

Spartans took the lead shortly after, when Kerry Montgomery leaped above the Durham defence to head the ball into the back of Katie Luther’s net.

It was a momentary respite which lasted four minutes.  Lana Cleland hurdled a couple of challenges as she raced into the box before unleashing a fine strike across the goal to put Spartans back in front. 2-1.

Young Scottish midfielder Zoe Ness was keen to mark a visit back across the border with a goal however her attempt on the stroke of half-time hit the side-net.

It was first blood for the tourists as the second half got off to a lively start.  A Beth Hepple corner into the six yard box saw the Spartans defence fail to clear the danger and the ball was bundled over the line by Jess Round from a yard out. 2-2

Spartans started to take control of the game and on the hour, a route one aerial launch from Lessells was seized upon by Sarah Ewens and the striker drove the ball home to give her sides the lead for the third time.  3-2.

Ewens put some light between the teams in the 76th minute when she slotted home a penalty kick after she was upended in box following a clumsy challenge by a Durham defender. 4-2.

Durham’s claims for a penalty of their own were waived aside by Referee Rennie after Montgomery and Hepple tangled in box.

Seana Cooke was a shoelace’s length away from getting on to a Beth Jennings cross in the box as Durham looked for a way back into the game.

Beth Hepple’s 89th minute goal gave Durham some late hope however it was too little too late and Spartans held on to their 4-3 lead to record a win against a well-drilled WSL 2 outfit.

Double scorer Ewens was delighted with the win and her two goals. “The first one came from a long ball from Charlene, who is claiming an assist in the changing room, and I just went for it and it went in.  For the penalty, I was just glad it hit the back of the net and I’m always nervous before taking them!”