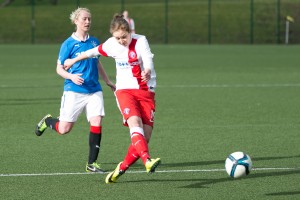 A goal from Sarah Ewens, deep into second half injury time, secured a League Cup win for Spartans against Rangers in challenging conditions at Garscube Sports Centre.

The long spell of additional time came as a result of an unfortunate injury to Louise Mason who clattered into the perimeter fence that sits tight to the touchline.  We’re delighted to report that Louise is ok although she may have lost a hair bobble in the process!

In what turned out to be four seasons in one day overhead, the game kicked off in overcast conditions which were to later offer players and the hardy bunch of supporters watching on the embankment through the fence some hailstones, rain and blue sky.  The football season has finally arrived!

The game kicked off in a wind tunnel as both sides took time to find their way as the spherical object of air floated around akin to the £1.99 footballs purchased for kids down the beach in the summer.

A couple of early agricultural challenges from the home side let the tourists know they were up for the fight as the tale of the two cities took shape.

The best of the opportunities for Spartans in the opening half hour came from the foot of Katie Reilly who saw her well drilled shot go over Rachel Halbert’s crossbar.

At the other end, a fantastic double save by Rachel Harrison saw the Spartans shot-stopper first of all push a shot onto the bar before reacting well to prevent a follow up header from creeping into the net.

Both teams made the pilgrimage back to the changing rooms at the interval, primarily for half time instruction from their respective coaches but possibly for the benefit of some warmth in what was a bitterly cold afternoon.

Spartans continued to dominate possession and Bobby Beveridge made a venture into the opposition danger zone before testing Halbert from distance.

A lengthy delay ensued as both sidelines showed concern over Mason who collided with the fencing following a challenge tight on the touchline.  Sporting a Terry Butcher-esque bandage over her head, Mason was able to leave the field on foot and was subsequently replaced by McLaughlin.

Spartans continued to lay siege upon the Rangers box as they looked to translate their possession into goals.  Ewens came close with a free-kick that narrowly went past Halbert’s post then moments later, an Alana Marshall delivery couldn’t be directed net bound by the prolific strikers head.

Ronaigh Douglas continued to ask questions of the Rangers defence with her tenacious endeavours and when she threaded the ball into the path of Ewens in the box, the visiting bench looked on with hope however it was Halbert who raced out to narrow the angle before pulling off the save.

With the Referee looking at his watch and an additional half hour of play looking increasingly likely, Beveridge launched the ball up the park.  It eventually found its way to Ewens who kept her composure to open up and slot home to secure victory at the death and her side’s place in the next round.

Debbi McCulloch was delighted to get the season off to a winning start, “It’s always a tough, physical challenge against Rangers however I felt today we were the better team throughout the opening half. The start of the second half saw us allow them the chance to get on top of us a little bit, but I thought we controlled the whole game and had many opportunities to score.

“As the game dragged on I thought it was going to be one of those days that we weren’t going to hit the back of the net.  Sarah (Ewens) had a couple of chances as markers near the end however she thoroughly deserved to score today as her work ethic was fabulous.”