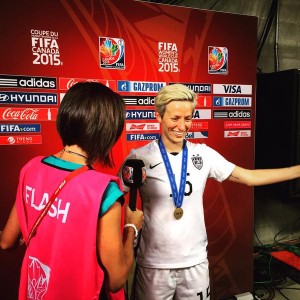 Anna Signeul’s side may not have made it to Canada this year however Scotland was represented on the big stage – and big screen – at the World Cup Finals.

Dunkeld-born St Johnstone fan and Motherwell Ladies player Eilidh Barbour was one of the BBC’s fantastic team at the flagship tournament.

We caught up with Eilidh in an exclusive interview as she gives her thoughts on synthetic pitches, legacy, memorable moments and we ask who claims a place in the Barbour World Cup XI.   Do you agree?

Spartans Women (SW): FIFA President Sepp Blatter recently said, “football on artificial turf is the future”.  A pre-tournament lawsuit noted it was a “first-class tournament on a second-class surface”.  What has your experience been speaking to the Coaches and Players throughout the Finals?

Eilidh Barbour (EB): “On the whole, the coaches and players didn’t shout about the surface once the tournament started. They were just keen for the tournament to be about the football rather than things they had no control over but the few complaints there were centred around the surface being slow.

“It was something that was noticeable in the very opening game when Canada and China played on a hot afternoon in a stadium that provided no shade. It doesn’t matter how much the surface is watered in those conditions, it dries out and becomes almost sticky.

“I did notice from walking on the pitches in various venues that some surfaces were better than others which I found surprising, I thought all surfaces in the tournament would have been the same.

“I’m all for synthetic surfaces when the conditions or finances of a club demand it but I think everyone was in agreement that the tournament should’ve been played on grass and, as anyone who’s played on a quality grass surface will tell you, there is no substitute.” 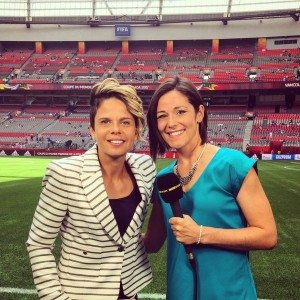 SW: Canadians grabbed the Finals with both hands with circa 1.25 million attending games across the tournament.  What kind of legacy can this perhaps deliver for the domestic game in Scotland and England?

EB: “I don’t think you have to host a tournament to inspire girls to play football, you need success. England’s 3rd place finish raised their profile hugely which will hopefully have a knock on effect to their domestic game and the game north of the border as well.

“When it comes to success it’s a little different for Scotland. The aim right now isn’t to medal at a tournament but to qualify and do it consistently. It’s a difficult and slow process unfortunately but, without the platform a World Cup brings, development will be even slower.

“Many I’m sure scoffed at Germany’s 11-0 hammering of Ivory Coast and Switzerland’s 10-1 win over Ecuador but, however horrible it was for the players to be part of, they will have benefitted more than anyone sitting at home watching.

“Scotland are unfortunate to be in such a strong qualification zone where good teams are always going to miss out but it just means we need to continue to strive to match the likes of Switzerland and Netherlands who experienced a World Cup for the first time this year. We need our first time and soon.”

SW: The Norway players made the headlines with their spoof documentary.  How big a part has coverage on the BBC helped to break down some pre-conceived ideas of the women’s game?

EB: “The BBC isn’t there to change people’s minds about whether they like or dislike women’s football. There are some people who will never like it and, for me, that’s ok. What I hope is that the coverage has developed a greater understanding of the women’s game, the dedicated athletes that play it and the way in which it is played.

“It’s different from the men’s game and, once that’s accepted and it’s not a constant comparison, I hope people enjoyed what was a fabulous tournament.

SW: What has been your most memorable moment(s) of the tournament?

EB: “The tournament really came to life for me in the group match between Nigeria and Sweden. It had everything you wanted in any football match plus the colour and celebrations of a World Cup and the recently crowned BBC World Player of the Year Asisat Oshoala was just sublime to watch.

“I loved Canada captain Christine Sinclair’s double nutmeg followed by an inch perfect cross field ball to carve open England’s defence in their quarter-final, if Melissa Tancredi had finished it off, it arguably would’ve been goal of the tournament.

“Some of Japan’s passing play was just phenomenal and, of course, USA captain Carli Lloyd rounding off her hattrick in the final with that ridiculous piece of vision to score from the half way line was pretty special!”

SW: What impressed you most about newly crowned World Champions USA over the Tournament?

EB: “Their sheer determination and desire to win. I don’t think I’ve ever covered a team with quite the same need to win a trophy. It was almost bursting out of them. They’re not the best footballing side in the world in my opinion, but they played to their strengths and credit to Head Coach Jill Ellis for dropping Abby Wambach to the bench, they were a different team with Carli Lloyd playing further forward.

“It’s never easy to leave such a hugely influential player out of your starting 11 but to have the type of relationship with the squad that encouraged Wambach to continue giving support despite not being on the pitch shows how well the group was managed and the togetherness they had developed in the run up to the tournament.

“The only winners for me.”

SW: Who would be in your Eilidh Barbour World Cup XI?

EB: “I’m picking this team based on the players I saw and, with the timezone differences and amount of time I spent travelling, some teams I didn’t even see play on TV so sorry if I’ve missed your favourites!”

Do you agree?  Send your World Cup XI to us via Twitter at @spartansfcwomen using #BarbourXI