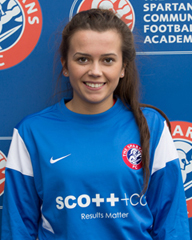 Debbi McCulloch’s makeshift Spartans were held to a frustrating 0-0 draw against Aberdeen at Ainsle Park.

The visitors have goalkeeper Flaherty to thank for their point on the road after the shot-stopper pulled off a string of top drawer saves to keep the Spartans attack at bay.

There was a first start for recent American recruit Morgan Mitchell, whilst Scotland youngster Carla Jackson (pictured) made her way onto the home bench after her long road to recovery after injury.

A Ciara Barnes driving run through the heart of the Aberdeen defence resulted in a fine strike that saw Flaherty equal to the task. From the resultant corner-kick, Louise Mason was denied by a one-handed stop from the Dons No.1.

After opening her account recently against Hutchie Vale, Ronaigh Douglas was unlucky not to find the target after Alana Marshall’s bye-line run set up an opportunity for the teenager and her shot narrowly cleared the bar.

Morgan Mitchell was bundled to the ground in the box with 56 minutes on the clock, offering the Referee his easiest decision of the afternoon. Agonisingly, Sarah Ewens could only watch as her penalty finished on the wrong side of the post.

It was almost an inspirational substitution as the teenager raced towards the visitors red zone before her  run was unceremoniously ended by a desperate Dons defender who earned a booking in the process.

Sarah Ewens lifted the free-kick over the wall only to watch Flaherty leap and push the ball over the crossbar, drawing applause from both sets of fans.

A strong shout for a second penalty was waved aside by the man in the middle as Sarah Ewens looked to have been brought down by Flaherty.

A rare excursion into the Spartans half by the visitors in the dying stages almost saw Aberdeen steal all three points against the run of play.

After spending almost 90 minutes as a spectator, Spartans 15 year old Scotland Internationalist Eartha Cumings, making her SWPL debut, reacted quickest to a through ball to deny an Aberdeen attacker a clear strike at goal, the ball fell to McLaughlin who saw her shot hit the post and across the face of the goal to safety.