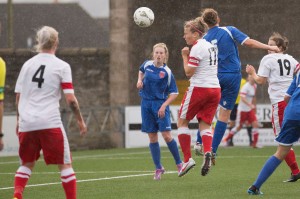 A brace each from Katie Reilly and Sarah Ewens plus a 40 yard wonder-strike by Kerry Montgomery secured a place in the Scottish Cup Quarter Final draw for Debbi McCulloch’s Spartans after their 2-5 defeat of Forfar at a wet and windy Station Park.

The beauty of the Women’s Football season in Scotland is that it’s played in the summer.  The unpredictability of the Scottish summer however ensured the players were forced to endure strong winds and an incessant downpour that lasted for the majority of the game, making fast flowing football on the 3G pitch at times a lottery.

Katie Reilly lead her team out against a Forfar team keen to avenge the 16-0 defeat on their SWPL travels to Ainslie Park earlier in the season.   The Captain almost broke the deadlock inside the opening minutes with a header from an Alana Marshall free-kick however the attempt narrowly went wide.

Spartans had the bulk of possession however it was the home side who took the lead as the heavens opened. Lindsey Dunbar causing the damage out wide before cutting inside into the box then unleashed a shot that went through Harrison’s legs into the net, sending the vocal home crowd wild.

Four minutes later, Spartans drew level.  This time the Marshall / Reilly set-up came off for the latter and she headed home the equaliser that left Leonie Simpson with no chance.

A quick look up and a thunderous strike at goal saw Kerry Montgomery give Spartans the lead for the first time in the match in the 37th minute.  Her 40 yard shot sailing over the Forfar keeper’s head into the net.

The plucky Forfar outfit hit back once again to equalise in the 51st minute.  Nicky Grant’s 20 yard attempt on Harrison’s goal beat the Spartans keeper to nestle in the net.

Spartans Manager Debbi McCulloch replaced Louise Mason with Claire Crosbie.  It was almost a dream start for the substitute when she evaded an aerial challenge from Simpson to set up a shot at goal however her shot was cleared off the line.

With 20 minutes left, Ashley Nicolson was replaced by Kirsty McLaughlin, making her 50th appearance for the Club.

As the game entered the final five minutes, with extra time in the rain a distinct possibility, K. McLaughlin’s free-kick into the box saw Katie Reilly rise above the Forfar defence to head home.

Moments later, the tie was effectively put to bed.  Sarah Ewens swooped on a mistake by Simpson at the edge of her box, before taking the ball off the keeper’s toes and slotting it into the empty net.

There was further misery for the home side in the final minute when K McLaughlin’s shot was spilled on her goal line by Simpson, with Ewens showing all of her poacher instincts to grab her side’s fifth of the afternoon and her 98th in Spartans colours.

Speaking after the victory, Manager Debbi McCulloch said, “I noted prior to today’s game that I was expecting a tougher game than the one earlier in the season and we got just that. Unfortunately we didn’t perform particularly well today and we allowed Forfar – who are a good counter-attacking side – an opportunity to keep themselves in the game throughout.

“Forfar scored with their first attack of the game and it shows that if you don’t remain focussed then that’s the kind of thing that happens.  However, we did show good character to bounce back and go in at the break 1-2 ahead.

“I asked the girls to go back out and build on the strong finish however we allowed them to come back into the game and whilst it was frustrating to lose two goals today, I thought that if we could grab a 3rd we would go on an see the tie off – and we went on to do so.  On the balance of possession, I think the result reflects the game and a win we deserved.”

Captain Katie Reilly added, “I thought Forfar were well organised today and we struggled to break them down however I think if we’d taken a few of our earlier chances, it may have been a different game.

Speaking of her two goals, Reilly noted, “The quality of deliveries from the wide players have been great. My first attempt was probably easier than the two I scored with.  I’ve probably not scored as many this year as I’ve wanted to and I’ve been working hard to remedy this.”