Forfar floored in the sun by sizzling Spartans 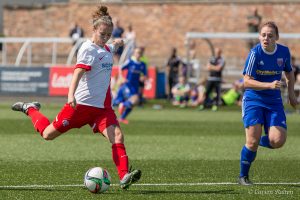 Suzy Shepherd’s Spartans got back to winning ways in the Station Park sunshine with a well worked 0-3 victory against Forfar Farmington in week 9 of the SWPL season.

Ronaigh Douglas returned to the bench after her injury woes that had forced the talented teenager to miss the bulk of the campaign so far and Dion McMahon looked to celebrate her 18th birthday with a win against a Forfar side who have been playing some good football of late.

It was a dream start for the visitors who took the lead after just two minutes.  Alana Marshall latched on to a Jen Malone delivery to nudge it past a defender before releasing Laura Gavin inside the box.  The striker’s first time strike curled out of the reach of a sprawling Fiona McNicoll to find the net.

The hosts looked to get back on level terms shortly after when they were awarded a free-kick just outside the Spartans penalty area.  Scott managed to clear the defensive wall – but also the crossbar of Cumings who watched it sail over the sticks.

Kirsty McLaughlin was inches away from scoring on her return to Ainslie Park when she narrowly sent her shot wide after tenacious play from Gavin who chased hard to offer the opportunity courtesy of a well timed cross.

The Forfar goal led a charmed life in the 35th minute when a Trish McLaughlin long range effort crashed off the crossbar however it’s luck was to run out four minutes before the break.

Persistent pressure from a dominant Spartans side saw them head into the interval with more light between the teams with Alana Marshall thumping home a rebound after McNicoll fumbled a Kirsty McLaughlin effort into the Vice-Captain’s path.

Spartans started the second half as they ended the opening stanza with the bulk of possession and it was almost a second for Gavin when she connected with a Louise Mason corner, only to see her glancing header flash wide.

Gavin was even closer to extending Spartans lead when she picked up on the scraps after Reilly’s shot was blocked inside a congested six yard box.  The snapshot shaved the outside of the post, much to the frustration of the striker.

Midway through the half, Shepherd made a double substitution with Ronaigh Douglas and Christie Kerr replaced Mason and Gavin who had served well in heat.

It was the two replacements who were to link well with ten minutes left on the clock to secure the win.  Reilly set up the move in the middle of the park when she distributed the ball quickly to Douglas.  The youngster’s second touch was to send Kerr into the penalty area where the returnee to the club composed herself before finding the back of the net with a perfectly executed finish.