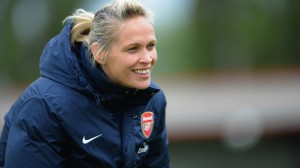 Former Spartans Player and Head Coach Shelley Kerr has been unveiled as Manager of Scottish Sun Lowland League side University of Stirling FC.

In what has been described as a historic appointment, the 44-year-old becomes the first female manager in Scottish men’s senior football.

Kerr, a former Scotland captain winning 59 caps between 1989 and 2008, replaces Eddie May and takes over the reigns at last season’s runners-up who currently sit second bottom of the table, searching for their first win of the campaign.

Kerr is delighted with the new role.  She said, “I am extremely excited to be given this opportunity to lead the men’s performance programme at Stirling.

“I am looking forward to transferring my knowledge and experience as an international player and coach – to develop further the players and the programme at Scotland’s University for Sporting Excellence.

“I’ve always had a desire to work in the men’s game and the University of Stirling – a very forward thinking educational establishment – has given me the ideal opportunity to do so.”

During her playing career, Kerr won every domestic honour in Scotland and played in the UEFA Women’s Cup. She also represented Doncaster Rovers Belles in England.

As a coach, Kerr gained experience at Kilmarnock, Hibernian and Spartans while progressing through the Scottish Football Association’s (SFA) Long-term Player Development pathway, eventually taking charge of the Scotland women’s under–19 national team in 2009.

She gained the UEFA Pro Licence in January 2013, shortly before leaving the SFA to manage Arsenal Ladies where she twice won the FA Cup.

Speaking about the news of the appointment, current Spartans Manager Debbi McCulloch, who took  over the Ainslie Park hotseat from Kerr in 2010 said, “I’d like to offer my congratulations to Shelley and it’s definately a well deserved appointment.   If there is one female who can be successful in the Men’s game it is Shelley.

“Her pure drive and determination as a coach / person will ensure she will get the very best out of the players at Stirling University.”