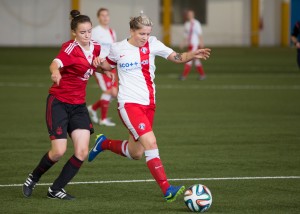 This Sunday, the Spartans playmaker is set to swap the thrill of Brazil for the buzz of Broadwood as her side take on Glasgow City in the Scottish Cup Final.

The 21 year old has been in impressive form since her return from injury and the talented midfielder is hoping to use her experience in national colours to bring home the silverware on Sunday.

With the Scottish Cup kick-off drawing closer, an ebullient Clelland said, “Personally, I’m buzzing. Obviously it is different playing at International and Club level but life is full of new experiences and exciting challenges.

“Cup Finals however are always something special. I’ve been fortunate enough to have played in the Final before during my time at Rangers and I’ll be looking to go one better this time by lifting the trophy with my Spartans team mates.”

The Scottish Cup has never been a traditional happy hunting ground for Clelland and her Spartans side. However after the perennial League Cup Finalists lost out on another shot after defeat in the earlier rounds, her side have the opportunity to go one better and lift the coveted prize.

“Historically we’ve never had a strong run in the Scottish Cup – however this year we have turned that completely on its head and it’s amazing to be in the Final on Sunday.

“Not only am I excited for Sunday, but I’m so pleased for all the girls at the Club. They’ve worked hard throughout the year, training three nights and putting their body on the line every Sunday, so to get an extra opportunity at the end of the season like this is a tribute to the dedication put in over the season.”

With a win already under her side’s belt this season against their Cup Final opponents, Clelland knows her side are capable of achieving another victory over City however the five times capped Scotland Internationalist knows the talking stops comes 2pm on Sunday.

“I think it gives City something to worry about considering we are the only team in the league to have beaten them for six years.

“At the end of the day, it’s 90 minutes of football. Two teams know what they have to do. We’ve beaten them this season and they’ve beaten us. It’s what happens on the day and who is up for it the most that will decide the winner.”