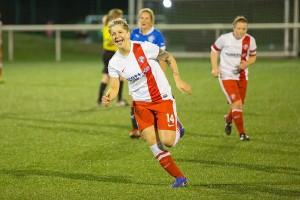 Goals from Lana Clelland and Kerry Montgomery gave Spartans a two goal win against second place Rangers at Ainslie Park to close the gap between the sides to 7 points.

The midweek fixture, initially scheduled as a home tie for the Glaswegian side, took place under the Academy floodlights in what were ideal conditions for two teams keen to play fast flowing football.

Rangers had the bulk of the early possession however they were unable to convert into chances with neither goalkeeper particularly troubled in the opening exchanges.

The first chance of the game fell to Sarah Ewens, who netted her 100th Spartans goal at the weekend, however she was met by the fluorescently kitted out Khym Ramsay who prevented the prolific striker from starting her journey towards her second century.

A carbon copy attempt moments later offered the same outcome whilst at the other end, it was the safe hands of Rachel Harrison who pushed a Kirsty Howat effort over her crossbar to ensure the sides went in all square at the interval.

Rangers may well have found themselves slightly aggrieved just six minutes into the second half when they were reduced to 10 players after Natalie Ross received her second yellow of the evening for a foul in the middle of the field.

After making her return to action in Sunday’s win v Inverness, Lana Clelland made another cameo appearance from the bench, this time replacing Katie Reilly and it was yield instant success.

Within two minutes of taking to the field, the Scotland Internationalist collected the ball outside the Rangers eighteen yard box before coming back inside before thundering the ball over Ramsay to make an immediate impact and give her side a 69th minute lead.

The game was put to bed as a contest with nine minutes left on the clock when Kerry Montgomery left her defender behind before finishing off a fine solo run to bullet the ball past Ramsay to double the lead and give Spartans back-to-back victories over the SWPL’s top two sides.

Speaking after the game, Head Coach Mike Ross said of his side’s performance, “Midweek games are always different to plan for as opposed to the usual Sunday routine however I felt the players applied themselves well throughout the game. Rangers had a tough game on Sunday in the Cup which went to extra time so we knew they would be tired and perhaps a bit drained.

“The 1st half was tight and physically demanding however the 2nd half saw us open the game up and of course the sending off changed things as well and when we made our chances, we took them well and scored two well executed goals from Lana and Kerry.”

Goalscorer Lana Clelland, was delighted at the win and at getting her second goal in as many games as she continues to build up match fitness after her long layoff through injury, “I couldn’t have wished for a better comeback if I’m honest. I’m just buzzing to be back playing and it was great to get on the score sheet again.”

Spartans victory therefore allowed Glasgow City to secure the league title without having kicked a ball, with their lead at the top of the SWPL now unassailable with just three league matches left to play.