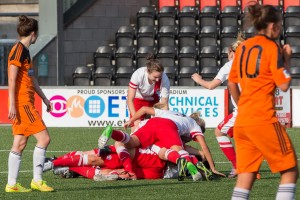 “It has to go down as one of the best days of my managerial career so far.” That’s how Spartans boss Debbi McCulloch described her side’s victory over Glasgow City, the first SWPL defeat for the SWPL leaders in almost six years.

The solitary 54th minute goal from Captain Katie Reilly was enough to separate the sides at the Excelsior Stadium and close the gap on fourth place Celtic who could only draw 2-2 on the road at Aberdeen.

Spartans made a series of position and personnel changes as they prepared to take on the league leaders at the home of Airdrieonians FC.

City, who recently qualified for the last 32 of the Champions League, started the brightest and looked dangerous in the opening exchanges. However, they were to be denied throughout an entertaining match predominantly by the gloves of super-stopper Rachel Harrison, playing in her 101st game for the side.

The first half was without goals but not without incident as Louise Mason’s no-nonsense challenge put paid to Eilish McSorley’s involvement in the game, then moments later, a clatter of heads between Kerry Montgomery and Fiona Brown saw the Glasgow player come off second best and was sensibly replaced.

Rachel Harrison was in fine form, earning post-match plaudits from both Managers and she kept her team in the game with a series of first class saves to thwart a busy City. The Scotland squad member was called into action midway through the opening half when she produced a point-blank save to deny Jo Love.

Louise Mason was unlucky not to break the deadlock on the stroke of halftime, however she couldn’t dig the ball out from under her feet in time to slide it past Niki Deiter.

The lead however materialised just nine minutes after the interval.

Rachel Harrison delivered a finely weighted ball down the middle of the pitch for Reilly who allow the ball one bounce on the 3G surface before unleashing an unstoppable drive that left the keeper no chance.

Spartans had the woodwork to thank as Leanne Crichton’s free-kick crashed off the bar then shortly afterwards, a timely intervention by Suzy Shepherd in the box denied new signing Morgan Marlborough from opening her City account.

Harrison made yet another crucial stop with six minutes left as she turned Abbi Grant’s net-bound shot round the post as the game entered what could only be described as ‘squeekybumtime’ for Spartans.

City launched into another attack at the death in a valiant attempt to snatch an injury time equaliser however McCulloch’s side held on to record a historic victory.

Manager Debbi McCulloch said, “The girls played brilliantly today. I definitely don’t think it was just lucky, I feel we deserved to win today.  We defended resolutely when required, we were creative in midfield, particularly in the first half and we looked a real threat.

“There’s a lot of players who have played in Cup Finals against City and may be mentally scared however it’s a monkey off our back.”

McCulloch also paid tribute to her goalkeeper Rachel Harrison, “That was the best game I’ve seen Rachel play for us. If you were to count the number of saves she had to make – and credit to City who made her pull off world class saves – she was on the top of her game.

“But I think throughout the whole team, everyone done their job and played well today. When that happens – result like today happen.  There are some players who have waited for just as long as I have to beat City, which is probably a huge target for every club in the league.

Speaking of goal scorer Katie Reilly, McCulloch said, “What an absolutely fantastic finish and I’m delighted for her. Katie showed her true character and why she is captain of this team by playing out of position, trying her hardest and when asked to do so, putting the ball into the back of the net.”

Reilly added, “I am absolutely delighted today. I felt confident going into today after the two previous games being as close as they were and by sticking to our game plan, we were worthy winners.

Speaking of her strike that led to a six year unbeaten streak for City coming to an end, Reilly said, “I’m not usually caught in that situation however I changed position today. I just watched it coming down and gambled by having a strike.  Sometimes the go in – and this one did.  I’m happy.”