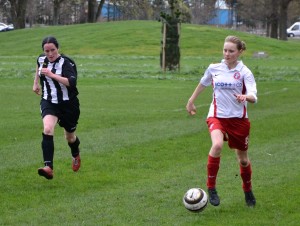 Spartans Reserves hit Leith Athletic for six at a windswept Leith Links to secure another three points in the early rounds of their SWFL Division 2 South East campaign.

With a handful of regulars out due to injury / unavailability, there was a chance for interim-coach Walter McGill to utilise his squad in a bid to add to last week’s win against Edinburgh South.

Spartans kicked off and went on the attack from the opening whistle.  Ann Smollet raced in on goal, only to be denied by Leith’s Canadian keeper Anna Marie Winner however the ball could only be parried into the path of Lucy Brown who scored with 45 seconds in the clock. 0-1.

The visitors doubled their lead in the 7th minute.  Brown’s pass sent Smollet racing in on goal and as the keeper raced out to close down Spartans striker, she pushed the ball back across the box for Brown to score from six yards. 0-2.

That comeback was halted when the Lucy Brown juggernaut drove home another to grab herself a 21 minute hat-trick.  The close-season signing from Musselburgh Windsor was quickest to react after a stramash in the box ensued following an Emma McNaughton header. 0-3.

To their credit, Leith rallied and in the 25th minute, they pulled a goal back.  A corner was whipped in and indecision in the Spartans defence saw the Leith No.17 head the ball into the net. 1-3.

McNaughton required lengthy treatment after an industrial challenge in midfield left the defender in some discomfort which eventually saw her unable to carry on.

The second half was barely three minutes old before Spartans added to their total.

Playmaker Smollet was manhandled in the box to give away a penalty.  Sturrock stepped up and drilled the ball low into the bottom corner past the keeper’s outstretched arm. 1-4.

Six minutes later, a fantastic piece of opportunism and accuracy by Emma Curson saw the ball fly from some 35 yards before nestling in the top corner.  1-5.

Smollet, one of the key architects in Athletic’s downfall, was desperately unlucky not to score after an aerial challenge with the keeper saw the ball break free however it just wouldn’t fall into her path and it was hoofed unceremoniously to safety.

In the 63rd minute, Smollet finally got her reward.  After winning the footrace to avoid being the filling of an Athletic defender sandwich, the striker rolled the ball under the advancing Winner to complete the scoring.

After the game, Interim-Coach Walter McGill said, “It was great to see the team build on the positive display last week and also that the work at training is starting to pay off already.

“The players are developing at a rapid pace and we are reaping rewards on the pitch as a result.  I was impressed by the phenomenal team performance today and it was great to see everyone getting game time and making an impact when they were on the park.

“It was disappointing to have to withdraw the two Emma’s (McNaughton and Curson) after the duo took knocks during the course of the game.  This meant some reshuffling including Captain Nichola Sturrock who showed her versatility by moving from striker to centre midfield at half-time.

“As a unit, I felt the team controlled the game from start to finish.  It was a pleasure watching Lucy Brown scoring an outstanding hat-trick in a dynamic 20 minute spell whilst Anne Smollet lead from the front and was instrumental in forcing errors which resulted in four of the six goals.”