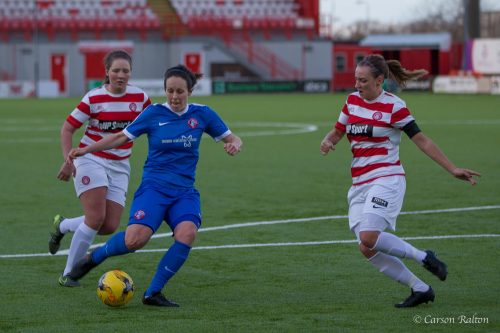 Spartans travelled to Hamilton for their second league fixture of the season and had to wait until twelve minutes from the end to secure the three points.

Spartans had their first attempt on goal in the fifth minute when Marshal stung Hopkins hands from 20 yards and with no one able to get on the end of the rebound Hamilton managed to clear the danger.

Hamilton went on the attack in the eighth minute and pulled an excellent save from Viollaz in the Spartan goal. Spartans then got a hold of the game and several attempts from Boyce and Gavin couldn’t breach the Hamilton rearguard. A number of corners came to nothing and just as Spartans looked likely to edge in front the half came to a close.

The second half followed the same path as the first with Spartans coming close through shots from Boyce, Gavin, Cavanagh and Marshal. Eventually Boyce had the ball in the net when Hopkins parried a vicious Cavanagh drive but was correctly flagged for offside.

It took a set piece to open the scoring as a Simone McMahon corner could only be palmed into the net by Hopkins who had the low sun to deal with. In the end the one goal proved to be enough to secure the three points from a tough Hamilton side.