Harrison sets out stall for SWPL season opener against Forfar 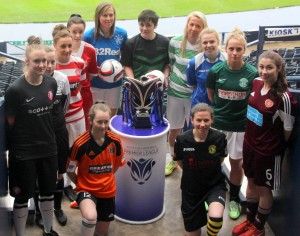 Spartans No.1 Rachel Harrison was at Hampden on Wednesday as players from all 12 SWPL clubs congregated at the national stadium to launch this season’s competition.

The 2015 SWPL season kicks-off this weekend as the top dozen teams in the country jockey for a top six position ahead of the mid-season break at the end of June.

With an additional Edinburgh Derby following the promotion of Hearts to look forward to, it promises to be a fantastic season ahead for Debbi McCulloch’s side.

Speaking ahead of this Sunday’s opening clash at Ainslie Park against Forfar Farmington, keeper Harrison said,  “It’s great to be back after what seems like a long break over the winter.   Debbi’s ensured we’ve had a tough 8 weeks of pre-season and we’re looking forward to getting the league campaign underway.

“We’ve prepared well – perhaps the best pre-season since I’ve joined the Club which has included the additional bonus of strength and conditioning sessions too.  We’ve brought players in and some have moved on, just like the rest of our opponents I’m sure, but we are strong as a unit and looking forward to Sunday.”

Sunday’s league opener comes on the back of a confidence boosting League Cup win away to Rangers, a result that pleased the 25 year old shot stopper.

“It was important to start the season off to a win and to do so with a really good performance all round was pleasing.  Obviously it’s great for me personally to have kept a clean sheet, but if the girls in front of me are defending well and popping the ball in the net at the other end, I’m happy to pick up a win each time.

“We’ve had a really good week at training and you can smell the enthusiasm for Sunday when you walk into the changing room, everyone is up for the challenge.  A successful start in front of our home support will be our immediate aim.  As long as we are winning, that’s the most important thing.”