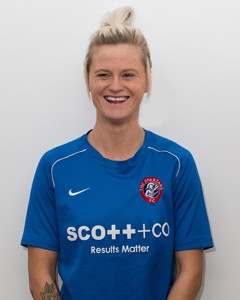 Trisha McLaughlin netted her first hat-trick in senior football to guide Spartans to a 5-1 Extra Time win over Stirling University in the opening Round of the SWPL League Cup.

It was a day of ‘firsts’ with Suzy Shepherd and Ian McDonald overseeing their inaugural competitive game as Manager and Coach respectively whilst a series of players were donning the red and white of Spartans for the first time ‘proper’.

The opening forty five minutes saw Spartans earn the lion’s share of possession whilst the Students were dangerous on the counter attack in what was largely a midfield war of attrition as both sides looked to gain an early advantage.

Spartans stopper Eartha Cumings had to look sharp on a couple of occasion to deny the dangerous Ashley McDonald whilst at the other end, Alana Marshall’s corner saw the Stirling keeper scramble to push the ball over the bar.

The second half was barely two minutes old when Spartans took the lead. Louise Mason made a telling break that took her to the Uni bye-line before whipping in a dangerous low cross than was hammered home first time by Trisha McLaughlin.

On the hour mark, the Students drew level. Jade Gallon collected the ball midway inside the Spartans half and her speculative long range effort looped over the head of Cumings to equalise.

With the game entering its final stages of a decidedly busier second half, Alana Marshall’s thunderous strike met the crossbar and with that, the sides entered an additional thirty minutes in a bid to separate the sides.

The Students were left bemused early in the opening period when a stramash in the box saw the ball nudge out of the hands of keeper Cumings and into the home net. After consultation with her stand-side Assistant, Referee Lorraine Clark ruled out the goal for a foul.

Spartans then benefitted from a decision at the other end when Katie Reilly and Uni goalie Chloe Logan collided in the box and without hesitation, the whistler pointed to the spot. Alana Marshall stepped up and sent the keeper the wrong way to edge her side in front.

Six minutes later, the passage to round 2 looked to be clearer for Shepherd’s side when Laura Gavin broke the Stirling offside trap to drive her effort through the stranded Logan.

The pick of the goals came in the second period when McLaughlin’s acrobatics saw her overhead kick sail into the Stirling net.

Then, with the last kick of the ball, McLaughlin rounded off a great win and a personal haul of a hat-trick when she pounced on a loose ball to race in on goal and beat the keeper in a one-on-one duel.