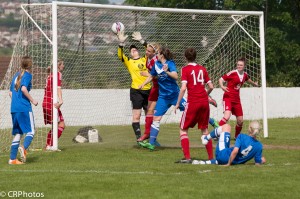 A late header from Sarah Ewens gave Spartans a 1-2 victory on the road against Aberdeen which guarantees Debbi McCulloch’s side a post-split Top 6 SWPL place with two games left before the summer break.

It was an early departure from the Academy for a Spartans side heading to the home of Sunnyside Juniors to take on an Aberdeen outfit who sat one point behind the visitors before kick-off.

Spartans started off the livelier of the two teams and both Alana Marshall and Kerry Montgomery saw their headers from corner kicks go wide of the Aberdeen goal.

Then, in the 13th minute, Spartans took the lead. Ronaigh Douglas pressured Aberdeen’s Anderson who’s pass back was intercepted by Ewens who curled a right foot shot past the advancing Flaherty.

Aberdeen’s first attempt to trouble Rachel Harrison, came in the 20th minute, when Campbell shot from distance but the left-footed attempt went well wide.  It was however to serve as a warning sign and three minutes later, the home side were level.

McDonald’s prod up the field filtered its way to Shepherd who’s clearance was charged down falling kindly back into the path of Stewart who stroked the ball past the advancing Harrison.

Aberdeen’s Dempster then slid a pass through the centre to Anderson who was foiled by the out-rushing Harrison who saved down to her right with Pagliarulo mopping up the loose ball and clearing up any danger.

The first chance of the second half fell to Spartans. Montgomery went on a bursting run through the middle of the park before a fine one-two between McLaughlin and Briggs saw the former shoot cross the keeper only to see the ball come back off the far post and away to safety.

The woodwork saved the home side again in the 65th minute after Pagliarulo’s 25 yard strike crashed of the cross bar and the Aberdeen defence breathed another collective sigh of relief.

With just under ten minutes left on the clock, a Marshall corner to back post was prodded back into the 6 yard box by McLaughlin and headed home by Sarah Ewens for what proved to be the match winning strike.

The win pleased Manager Debbi McCulloch, “We started the game really well and created two great chances from corners and then Sarah pounced on a short pass back and finished the first goal very well. A defensive error allowed Aberdeen back into the game but that was to be their only real effort on goal.

“We controlled the game and battled hard in a game where the ball was more in the air than on the ground. We really pushed for the second goal after half-time and thankfully Sarah (Ewens) popped up and headed the winner home from a corner kick.

“It was a good solid performance from the players today which helps towards confirming our spot in the top six for the second half of the season. There are two league games left until the summer break and we will be working hard this week in training to prepare for Queens Park’s visit on Sunday.”