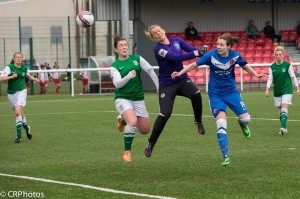 A ‘route-one’ goal from Ciara Barnes and a Sarah Ewens double helped Spartans to a 3-1 victory in an enthralling SWPL Edinburgh derby against Hibernian Ladies at Ainslie Park. Spartans closed the gap on their Edinburgh rivals in a physical encounter that saw the visitors finish the game with 9 players.

The first clear cut chance of the game fell to Trisha McLaughlin who forced a fine 13th minute save from Hannah Reid in the Hibs goal.

4 minutes later, Spartans broke the deadlock. Sarah Ewens shrugged off the close attentions of a Hibs defender before rounding Reid and firing home into the unguarded net.

Spartans doubled their lead on the half-hour after a route one ball from Barnes saw the keeper misjudged the bounce on the now very wet Academy surface. The ball sailed over her head and crossed the line before Ewens made double sure.

Hibs weren’t to be discounted just yet and pulled a goal back in the 34th minute. A fantastic long range effort from Rachel Walkingshaw nestled in Harrison’s top corner.

Frustrations from the visitors started to take over and 2 bookings in 8 minutes for Lucy Graham saw Hibs reduced to 10 players.

The victory was sealed when Sarah Ewens headed home in the 80th minute. The striker could barely contain her excitement as she raced over to the Spartans bench, who were off their feet as the crowd went wild.

It’s was further misery for Willie Kirk’s side as Siobhan Hunter saw red for a second yellow after a challenge on Marshall.