“Home is where the heart is” – It’s the Return of the Pag! 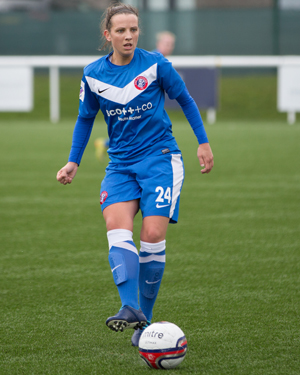 “It’s great to return back to my footballing home.”  There’s no mistaking it – the ebullient and energetic Danni Pagliarulo is back!

The 28 year old re-joined the Club after heading West and the Midfielder is already enjoying the start to a new chapter in her Spartans career.

Speaking ahead of Sunday’s SWPL opener against Hamilton Academicals at the Ainslie Park, Pagliarulo’s talked of her pride and passion for the Club.

“Spartans has always been my home. I moved through to Glasgow in 2012 and logistically it made sense to find a team across there.  I made sure that I left on good terms with the Gaffer, as I knew in my heart that I was always going to come back home.”

Pagliarulo, who captained Spartans in their inaugural season in 2008, made her comeback through SWPL rivals Glasgow City after her well documented time out of the game due to illness.

“I joined Glasgow City to renew my passion for the sport I’ve played since I was a wee kid and there was the opportunity also to play in the Champions League, something every player aspires to do in Club football.  It was a great experience for me but now it’s time for me to get back playing regular football.

“I learned a lot during my spell there, both on and off the pitch, including a lot about myself in how to deal with various things.  Now I’m back at the Academy, I hope to be able to pass this on to the girls, especially the younger ones within the squad, including the likes of Ronaigh (Douglas) and Sophie (Cunningham).”

Douglas and Cunningham have impressed Manager Debbi McCulloch and Senior players alike since being drafted into the extended squad.  Danni is enthused at the prospect of seeing the duo continue to build on the experience gained so far.

“The two girls are great prospects – brilliant kids.  The pair are really good young talented footballers.  They need to come out their shell a wee bit but that will come – especially with banter in the changing room!

The sides met pre-season, Spartans running out 2-0 winners however Pagliarulo refused to be drawn into comparisons between that victory and what lies ahead for the League opener.

“I don’t think we can read anything into the result.  As a squad we’ve prepared well throughout the build-up via games and training.  To be fair, it’s probably one of the best pre-seasons I’ve ever had and I think the result we had against Rangers in the League Cup was a massive positive which showed the girls just exactly how hard we’d worked however we need to pull this through into Sunday’s game v Hamilton.”

Getting off to a winning start is vital as one would expect.  For Danni, it’s unsurprisingly no different.

“It’s very important that we get off to a flyer in the League and winning three points at home is the ideal way to start the season.   We strive to be a Top 3 side and I think we can do that.  We can compete with those around us at the top end of the table and with the fantastic team full of players able to bring so much to the party, I am confident we’ll start as we mean to continue at the Academy on Sunday.”

The game v Hamilton Academicals at the Academy kicks-off at 1pm.