Injuries and penalties are a spot of bad luck for Spartans 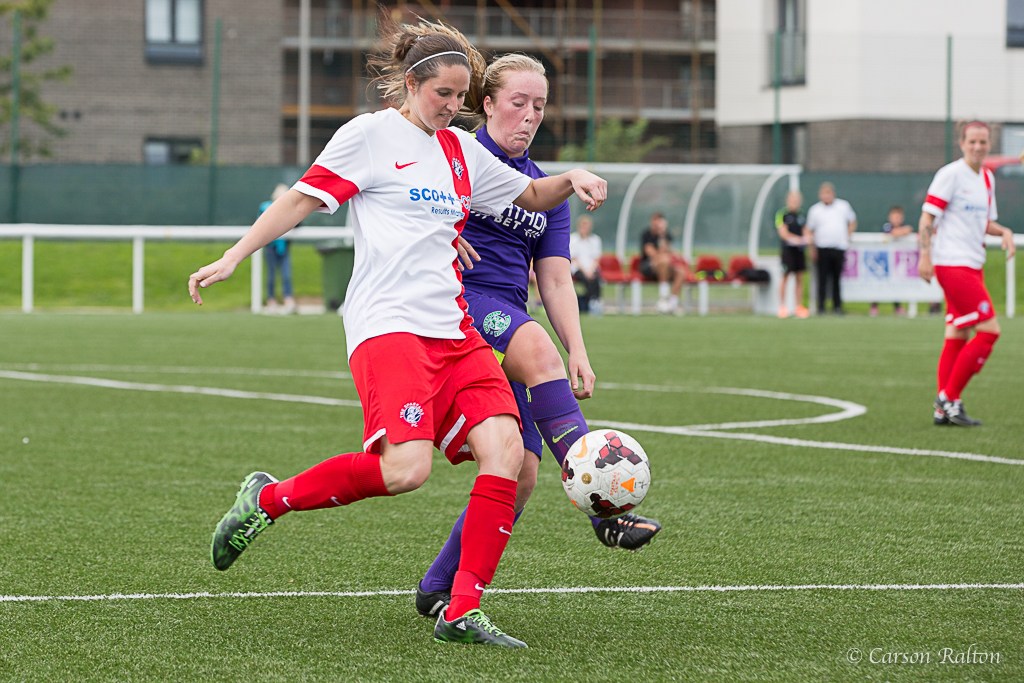 The sun may well have shone at Ainslie Park however Lady Luck refused to do the same as Debbi McCulloch’s injury ravaged Spartans went down 0-3 to Hibernian Ladies.

With the home treatment room now busier than a rush hour train carriage between Edinburgh and Glasgow, the warm-up was marred by an injury to striker Sarah Ewens who was unable to recover which gave youngster Ellie Simpson her first SWPL start.

Worse was to follow. Just eight minutes had lapsed when Claire Crosbie was clattered in a challenge that, at best, could have been classified as ‘unhelpful’. Running repairs were administered on the side of the pitch as Spartans continued on whilst being numerically disadvantaged on the field. Unfortunately for ‘Bing’, her game was over and McCulloch was forced into her second – and final – substitution of the afternoon against the SWPL joint leaders.

Despite their early woes, it was Spartans who had the first shot at goal, with Alana Marshall not far away with a 25 yard half-volley attempt.

The resolute Spartans defence was finally breached in the 37th minute when Lizzie Arnot was the victim of a trip by Eartha Cumings inside the box as the Hibs player looked to round the keeper. Referee George Calder deemed the spot kick to be punishment enough for the goalie and Arnot added the pain by putting her side 0-1 ahead.

On the stroke of half time, Alana Marshall was unlucky not to have had a more favourable outcome with a shot that went over the bar from the edge of the area.

Bobbie Beveridge was Spartans saviour just two minutes after the restart when she just about done enough to take the flight off the ball to prevent Abigail Harrison from properly connecting at the back post. Instead, the in-form Hibs player could only watch as her effort hit the bar before landing on the roof of the net.

On the hour mark, it was a feeling of déjà vu in terms of the player and outcome as Arnot netted her second from the spot. Harrison had her laces tickled on the edge of the box after some close attentions by a Spartans defender, the pacey Hibee attempted to stay on her feet however the man in the middle deemed the challenge to have not only been obstructive but also inside the box. Without the aid of video review, the penalty was awarded and with that, the visitors were 0-2 to the good.

Arnot sealed her hat-trick and Hibs win with the first of the afternoon from open play in the 79th minute.

With just three minutes left, Spartans were almost rewarded with a consolation goal no-one in the Ainslie Park stand would have denied them, when Ciara Barnes headed narrowly wide from a corner kick.

Meanwhile, Lynsey Cowan’s Reserves rallied at Ravenscraig after table toppers Motherwell raced to a 5-0 half time lead.   Spartans held their own after the break and created their own chances whilst restricting the free-scoring league leaders to just one additional goal.