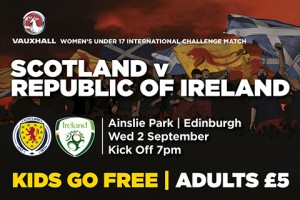 Ainslie Park will host the future of Women’s football this Wednesday when the Scotland Under-17 team play an International Challenge game against the Republic of Ireland.

Pauline Hamill’s young team will play at the home of Spartans on Wednesday 2 September (kick-off 7pm) in preparation for the start of their Euro Qualifying campaign in October.

The Women’s Under-17s have beaten the likes of Slovakia and Sweden in the past year and will be looking to start their season with a bang against the Irish. There could be some added interest for local fans too with Spartans’ young goalkeeper Eartha Cumings included in the squad.

Hamill’s side travel to Kazakhstan in October where they will face the hosts, Austria and Latvia in the first round of qualifying.

Tickets are just £5 for adults on the door and kids go free.