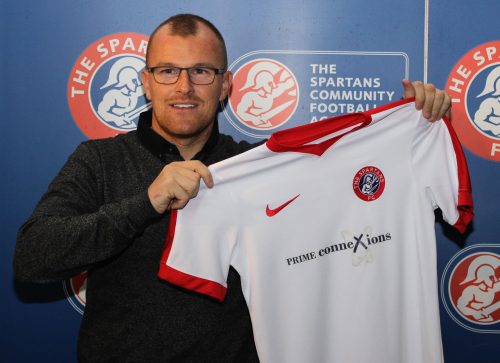 Spartans FC are delighted to unveil Paul Greig as their new Head Coach for the 2018 SWPL 1 campaign.

Greig returns to his native Scotland after successful spells in opposite sides of the world, having coached in both New Zealand and America.

Greig takes over at the helm from Suzy Shepherd in a bid to re-energise the squad that finished fifth in the table following a rollercoaster campaign.

The new manager was introduced to players at a specially convened meeting at Ainslie Park on Monday evening following his selection from a strong field of candidates.

Greig, who hails from Kirkcaldy, arrives in North Edinburgh after having spent five years in New Zealand then the last two across in the United States.

We caught up with the new Spartans Head Coach to find out more about him and to hear how the well respected coach’s journey brought him back home and to the capital.

It was a chance call from an old colleague whilst in a Community Coaching role at Hearts that Greig’s football journeys took off, quite literally.

The 30 year old Fifer said, “I was lured out to the land of the long white cloud by a former colleague who headed across there to explore new avenues. When I received the call from him to consider joining up again, I naturally jumped at the chance.

“The first three years were spent in Wellington before moving further up the North Island to Auckland. It was a very exciting time in my career and a fantastic opportunity to progress and move forward.”

Originally employed as a Football Development Officer, which was Greig’s main remit on a full time basis, he also undertook the role of developing young national team players, whilst also working alongside the National Under 17s team coaches to develop local and regional talent.

Greig then saw his role evolve into being appointed National Women’s League Head Coach with Capital Football, where he spent 24 months in charge, making the play-offs in both seasons.

Following 24 months in the Kiwi capital, it was off to Auckland where he became the youngest Head Coach to win a National League title in New Zealand at the age of just 28 years old.

“I worked for Northern Football in a fairly similar role to the one in Welly”, noted Greig, “I was involved in Coach Education then led the side to the ASB Women’s League title in 2015. As part of the that job there was also the National Talent Centre – very similar to the performance academy here in Scotland. I worked with the two age grades, under 17s and 20s. It was a thoroughly enjoyable spell working with these players and developing the game out there.”

From the long white cloud, it was a long flight across the continents for Greig’s next mission – the National Women’s Soccer League in the USA.

“I once again joined up with another former coaching colleague at Sky Blue FC in the NWSL which is a full time league, now moving into it’s 6th year, which makes it the longest serving professional league in America.

“It was a great experience to work with some of the greatest players in the global woman’s game on a daily basis and help them develop their game as best as I could.”

The interim role as Assistant Coach came to a conclusion at the end of last season.

“We were at the end of the season with Sky Blue and as is the nature of the game, there is always a degree of uncertainty over where the future can lie. The club were looking to appoint a senior high profile name, which they have already achieved and have done a great job in doing so. That left me with a bit of a coaching quandary in terms of what my next move was going to be.

“I kept in touch with a number of people back home and continued to maintain an avid interest in the game here, because, after all, home is home. You can be away for many years but Scotland will always be home to me.

“I threw my CV into the ring as I was genuinely excited by what I was seeing and hearing about the club. I always knew Spartans were a very well structured and professional organisation. When I was working with Hearts I actually came Ainslie Park when it was in the process of being built and I was impressed by the vision they had, not just for on the pitch, but off it too. Even walking through the gates again tonight makes it feel like a place you want to be part of. ”

With the USA topping the World Rankings, perhaps comparing the domestic game in Scotland with it is akin to apples and pears, but just how does Greig see Scottish Women’s football on a par with New Zealand?

“It’s fairly similar to New Zealand in many ways, right down to their world rankings with the Kiwis sitting just three places above Scotland in 19th place. In relative terms, Women’s Football is still in its infancy here. It continues to evolve year on year with it becoming more competitive as club’s develop and grow.

“One key difference I feel is the infrastructure, an area where Scotland is far more developed. I guess this comes with the territory of it being our national game, engrained in our culture and very much part of the national DNA.

“As for the USA, that is a different beast altogether! It’s a full time professional league, then they have semi-pro and college soccer too. When you look at the number of players registered in Scotland, it’s very feasible that one club in America will have just as many within their own ranks!

“The game is on the up in Scotland and these are exciting times to come back home and be part of it. Scotland truly has the opportunity to be a leading force in world football.”

So, it’s full circle for Greig who admits that his own playing career that hit the less dizzy heights than those of his previous charges in lifting silverware.

“Oh, my playing days were nothing overly strenuous. I kind of dabbled in some Under 21s and Juniors before going on my travels and got some game time out in NZ with a premier league outfit. I realised though that coaching was going to be where my future was in the game.”

So, what’s for the season ahead?

“One of the reasons I’ve come back to Scotland is to hopefully pass on the knowledge and experience I have learned from my time overseas and support the evolution of the game in the country. Of course, this is primarily at Spartans and take the club to a new level.

“It’s going to be a very exciting time here at Spartans with a young squad who will provide a really unique culture and provide another level of professionalism to match what is already being done at the club.

“I’ve got a lot of positive thoughts juggling around in my head already on what we achieve here and with the infrastructure in place and the players we already have, it’s definitely going to be an exciting 2018, that’s for sure.

“We’ll re-energise ourselves over short close season before we get back on the training pitch in earnest. Then it’s all down to the players to take our ethos on board and make this the club to join to play top flight football in Scotland.”