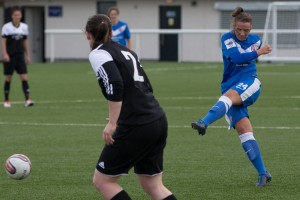 Spartans welcome fellow SWPL side Inverness City to Ainslie Park this Sunday as the knock-out stages of this season’s Scottish Cup reach the business end of the tournament.

Debbi McCulloch’s side go into the tie on the back of one of the biggest upsets in the domestic game for some six years, last weekend’s win on the road to Glasgow City, however the Spartans Manager notes there will be no room for complacency against Sunday’s opponents.

McCulloch noted, “The players are obviously still delighted after last week’s performance and result against Glasgow City but the message throughout the week has been that we must keep our feet on the ground and push on together to make sure we deserve to have our name in the semi final hat.”

The last time the two sides locked horns this season, Spartans ran out comfortable winners in an 11-o rout at Ainslie Park back in May.  Move forward a few months and the Clubs find themselves either side of the post Top 6 split, with the visitors sitting in 8th place whilst Spartans sharing joint 4th with Celtic.  League form is of course something that goes out the window come 90 minutes of knock-out football.

It’s not the first time the Clubs have met in this season’s competition, with Inverness getting their campaign off to a winning start, defeating Spartans Reserves at Bught Park.  Round 3 also saw Boroughmuir Thistle travel up the A9 and they were dealt a similar fate as their 2nd Division South East counterparts.

On the player front, the treatment table has had no new visitors although McCulloch has several players unavailable due to work commitments, whilst Louise Mason is suspended.  In more positive news, Trisha McLaughlin and Lana Clelland have responded well to their respective rehabilitation programmes and will be working hard to get back in the squad over the coming weeks.