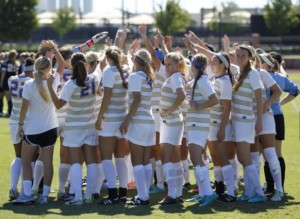 Spartans welcome the University of Tulsa to Ainslie Park tonight (Thursday)for an International Challenge Match as part of the American Division 1 side’s tour of UK & Ireland.

The Tulsa tourists, nicknamed the Hurricanes, will visit England, Scotland, Northern Ireland and the Republic of Ireland and will compete in eight games in 12 days as part of the Soccer Experience Cultural, Educational and Training Tour.

On the Scottish leg of their visit, the University side kicked it off in style defeating Kilmarnock 7-0 on Tuesday night and they stay in the Capital to take on Hibernian on Friday.

Tulsa is nestled in the North-Eastern quadrant of Oklahoma and according to the City of Tulsa’s website, the tourists will have no difficulty acclimatising themselves to the Scottish conditions as it notes, “The rainfall average is approximately 40 inches, and continually changing conditions occur in the city during all four seasons.”

Head Coach Kyle Cussen’s side drew their opening match of the tour against Irish league champions Raheny United 3-3, coming back to snatch a late equaliser just hours after landing in Dublin last Saturday.

Spartans Manager Debbi McCulloch said, “I’m really looking forward to welcoming the Tulsa ladies to Edinburgh as part of their tour.  The match will be a good opportunity to use the whole squad who have made a real positive impact on the SWPL so far this season and it’ll perhaps allow us to work on different things without the pressure of league points at stake.

“When we were first approached about the fixture, I thought it would be a fantastic test for us and will also be extremely useful in keeping the players match fit ahead of our trip to Aberdeen on Sunday.

“After Sunday’s physical encounter against Hibs, the players can have a longer recovery period at the beginning of the week which can only benefit them ahead of the journey North at the weekend.”

The match at Ainslie Park on Thursday kicks off at 7.30pm and entry is free.